On February the 19th, along with other foodies, I was cordially invited by Rachel of "Ugly Fruit" to attend our first "Soup Swap" event held at her place in Geneva...

Rachel got the idea to launch such an event after having read about it on an American blog called "Soup Swap" and which is at the origin of this idea. That's how Switzerland also got to join the ranks of the crazy soup swappers from across the Atlantic!!!

All in all, 5 multinational people out of 11 brought soup (6 x 1 liter each). We exchanged our recipes, chatted a lot, nibbled a little and we even took a "Soup Quiz"! 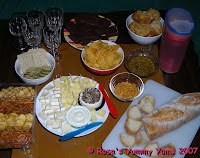 So here's the list of swappers and their creations:

Alison (Northwest USA) and Halvor (Norway) had found a recipe on their favorite food site Epicurious and decided to share it with us all because it had delighted them when they tried it at home. 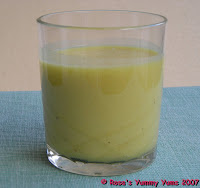 Their "Curried Cauliflower Apple Soup" (see recipe here) was very subtle and gorgeous. It had a sweet hint of apple, a spicy aroma of curry and a harmonious flavor of cauliflower. Very fragrant! 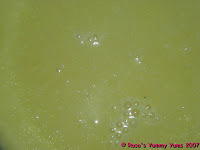 *********
Rachel (Iowa, USA) had received some spices and a soup recipe from an Israeli friend and thought that it would make a great soup for the swap, especially since she particularly loves chicken... 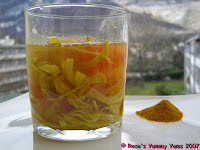 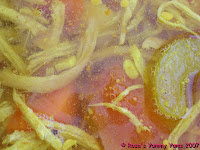 * "Hawayedge" is a mix of spices from Yemen made with black pepper, cumin, cardamom, caraway seeds, turmeric, saffron and coriander and perhaps a few other spices.

*********
Mélanie (France) loves to experiment with food and doesn't always like to follow recipes, so she made a soup with what she found in her refrigerator... 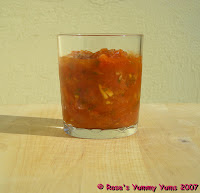 Her "Tomato Soup" was made with fresh tomatoes, onions, zucchinis and flavored with a pinch of curry powder and a dash of soy sauce (she likes both seasonings very much). This soup, somehow reminded me a little of "Bolognese Sauce". It tasted very fine and was perfectly well-balanced. A delicate and summery soup! 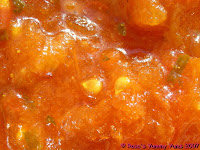 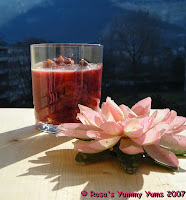 For his colorful soup, he used leeks, beef cut into strips and, of course, beetroot. It had a very pleasant light taste and a nice fried flavor. Tasty and raffined! 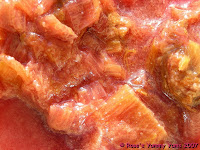 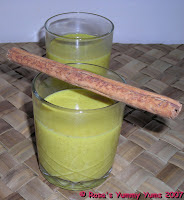 A long time ago, I thought to myself "Well, that's very interesting. I'll have to bookmark it!". So, I thought that it would be a good occasion for me to test this soup...

If you are interested by this recipe, it will of course follow very soon on my blog... 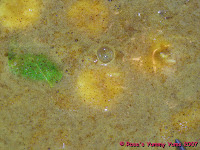 *********
Satu (Finland) chose to make a French soup from memory. She brought an "Onion Soup" which sounded very interesting. Unfortunately, I have totally forgotten to take one of her tubs (s%@t!), so I am in the incapacity to tell you how it tasted! But, I'm quite sure that it was delicious...

Once again, I wish to warmly thank our host Rachel for having invited us all and for always having great ideas!!!
Posted by Rosa's Yummy Yums
Email ThisBlogThis!Share to TwitterShare to FacebookShare to Pinterest
at 8:15 AM Labels: National Soup Swap Day, Swiss Soup Swap, Switzerland