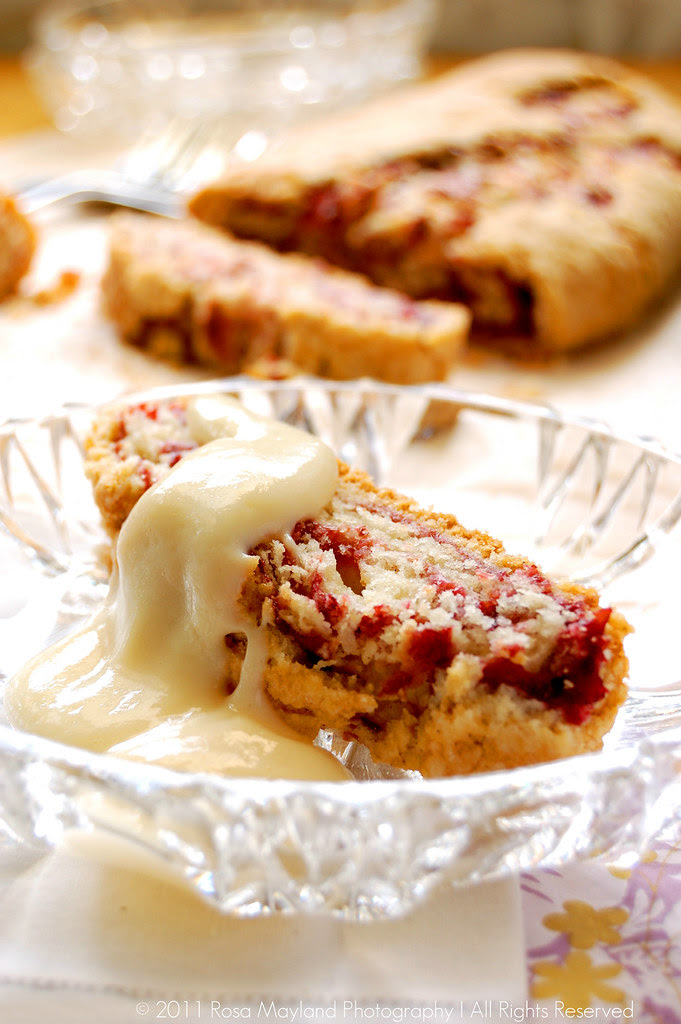 "Summer fades; the first cold, Northern air
Sweeps, like hatred, through still days -
The August heat now gone elsewhere,
To Southern, bird-filled coasts and bays;
Amid constricting vales of cloud,
A pale and liquid Autumn sun
That once beat down on an empty plain
And may again. And may again."
- Trever Howard, Autum

Recently, I have been in a very nostalgic and morose state of mind. No matter how much I love autumn and look forward to cooler weather, seasonal mood swings always tend to affect me strongly every year when the summer ends. I guess it is something natural/biologic which each of us experience to a certain degree. This time though, blahs hit me a little harder than usual and I guess this is partly beacause last week, on the 13th of September, my English grandmother would have celebrated her 85th birthday, that is if she had not passed away last March...

Usually, on that occasion I reached for the telephone, lifted up the receiver, composed her number, wished her a wonderful day and had a pleasant chat with her. Instead, there was no one to call and my day was rather eerie. A strange sensation of emptiness filled me. It is terrible how the deceased leave a void in our lives and hearts. An entire chapter of our existence gets closed forever and it is impossible to press the rewind button. By disappearing our loved ones take many information, memories and secrets to the grave.

" Loss is nothing else but change, and change is Nature's delight."
- Marc Aurelius

As we grow older, we learn to face the harsh reality of life. We are forced to see our heart get shattered in thousand pieces, make extremely difficult decisions, stand for ourselves, accept the fact that our dreams might never come true, start being more cynical and stop fantacizing too much, otherwise the sad and distressing events that we have to face as adults would just annihilate us if we were not a little prepared to suffer or get deceived. This is why we'd better be resilient and accept things as they are.

Well, eventhough I have embraced the fact that not everything in our existence if fair, acceptable or wanted, my first biggest regret as a grownup is to not have been able to go to visit granny for the last 13 years, to really have had the opportunity to get to know her better and get to pierce her carapace, to share some quality time together as equals and to show her the woman I have become (the last time we met, I was still living at home and had just stepped out of my adolescence).

Lack of bonding, money issues, weak kinship and limited communication made it very difficult for me to travel all the way to Derbyshire. My grandmother always asked me when I was going to come over to England, yet when I explained her that I was jobless and didn't have one dime in order to buy a plane ticket, I never got a response or reaction from her. Not one single answer, just silence. Eloquent silence that was worth a thousand words...

Anyway, even if I doubt she loved me as much as I loved her or cared for me as much as I cared for her, I nonetheless was extremely fond of my granny and revered her extraordinary culinary talents. Yet, never would I be capable of nourishing any form of resentment towards her as I am quite aware that people who were born at the beginning of the last century were brought up in an austere fashion and are not accustomed to exteriorizing their sentiments as well as emotions. It was quite taboo then, hence they are just sentimentally handicapped. This is what leads me to believe that somewhere deep inside of her, she had a well-hidden soft spot for me. So, to make peace with the past and to come to terms with my afflictions, I forgive her for having been imperfect relationship-wise and for not having given me the love I craved/needed. 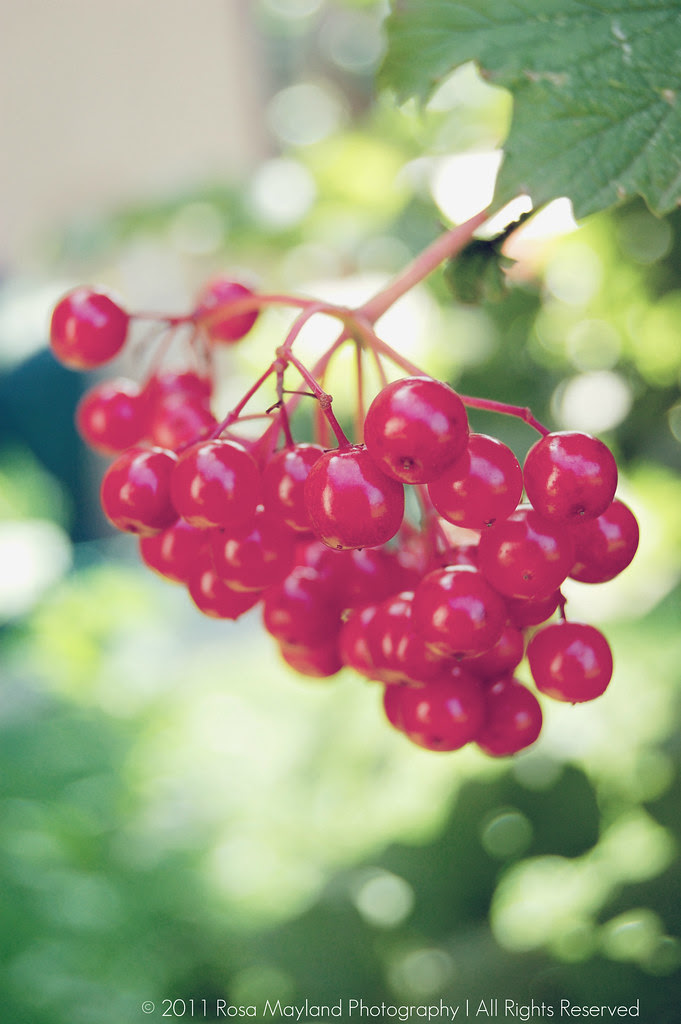 Having been missing my second country, Great Britain, and Nana a lot lately, I decided to bake a "Jam Roly-Poly" to soothe my aching soul. During our stay in this land of rich history, ancient cities, captivating legends, green landscapes, ethereal atmospheres and homey food, my grandma rarely failed to regale us with this humble and comforting speciality. It is the reason why I invariably associate this treat with this beautiful country and this branch of my family.

"Jam Roly-Poly" (also less glamorously called "Dead Man's Arm", "Dead Man's Leg" or "Shirt Sleeve Pudding") is a traditional British pudding which was invented in the 1800's and which is composed of suet pastry and jam (generally raspberry or strawberry jam). It is a kind of rustic, flattish and ugly version of "Swiss Roll". Originally, it was steamed, but nowadays it is mostly baked.

Suet pastry is one of the most English of all pastries. As a matter of fact, it is used in a large variety of dishes such as puddings, dumplings and pies. As it is made with the rendered fat of either lamb, beef or pork, suet-based doughs are definitely not suitable for vegetarians. Since this sort of fat imparts an incomparably amazing and "meaty" flavor to baked goods, it is unfortunately quite difficult to find many animal-free substitutes for it. Coconut butter is the only one I can think of...

So, instead of making a straight-forward "Jam Roly-Poly" I opted for preparing a spicy version of that good old-fashioned pud. To the pastry, I incorporated cardamom powder and I replaced the usual cloying raspberry/strawberry jam (I love those berries, but dislike them when they are transformed into jam), by damson plum (or Italian plum) compote (less sweet and boring) that I flavored with orange peel. Those additions give some dimension and modernity to this dessert, thus bringing it forth into the 21st century.

My "Spicy Damson Plum Roly-Poly" might not be the prettiest or most photogenic (I had problems shooting it and nearly lost my temper trying to make it look presentable - I am definitely not a prop artist) of puddings, but it doesn't really matter as what counts is its taste which is simply certainly not devoid of oomph. The pastry is crisp and flaky on the outside and smooth, fluffy as well as slightly moist on the inside. The compote adds an extra welcome wetness to the goodie and the spices confer a divinely heady fragrance to the whole. 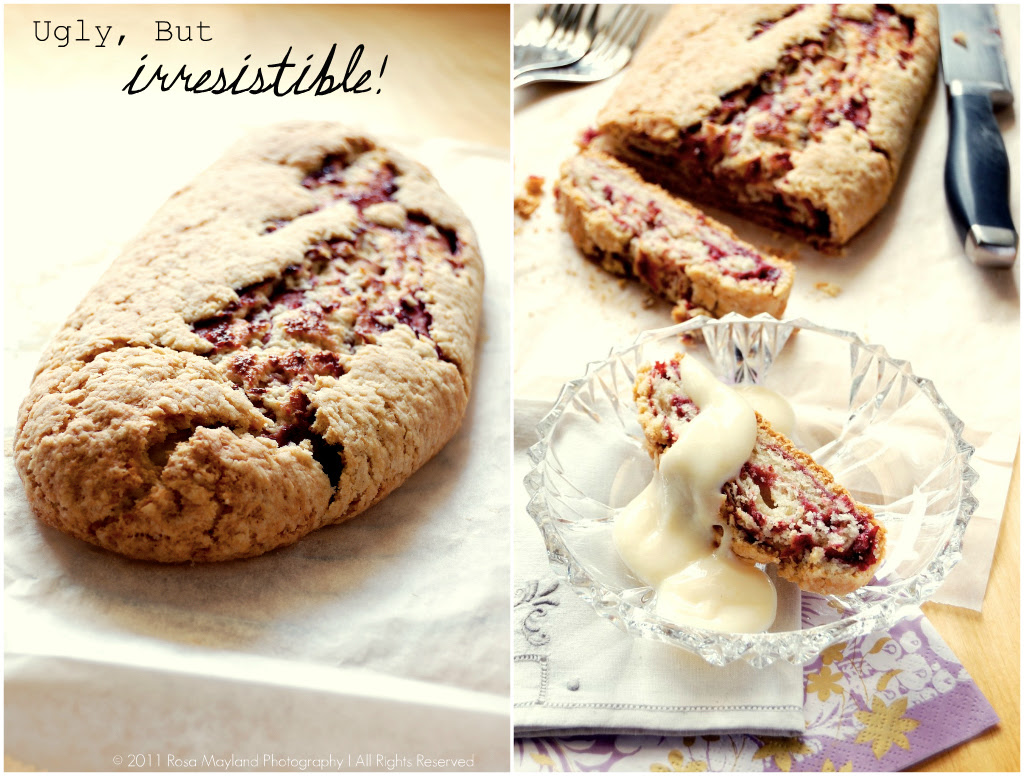 Directions:
1. Preheat the oven to 180° C (350° F).
2. Cover a baking pan with baking paper.
3. In a medium bowl, mix the flour together with the baking powder, sugar, salt and cardamom.
4. Add the suet and cut it into the flour mixture.
5. Then, bind with the milk in order to obtain a soft, but not sticky pastry. Gather together into a ball, but don't overwork otherwise it will get tough. 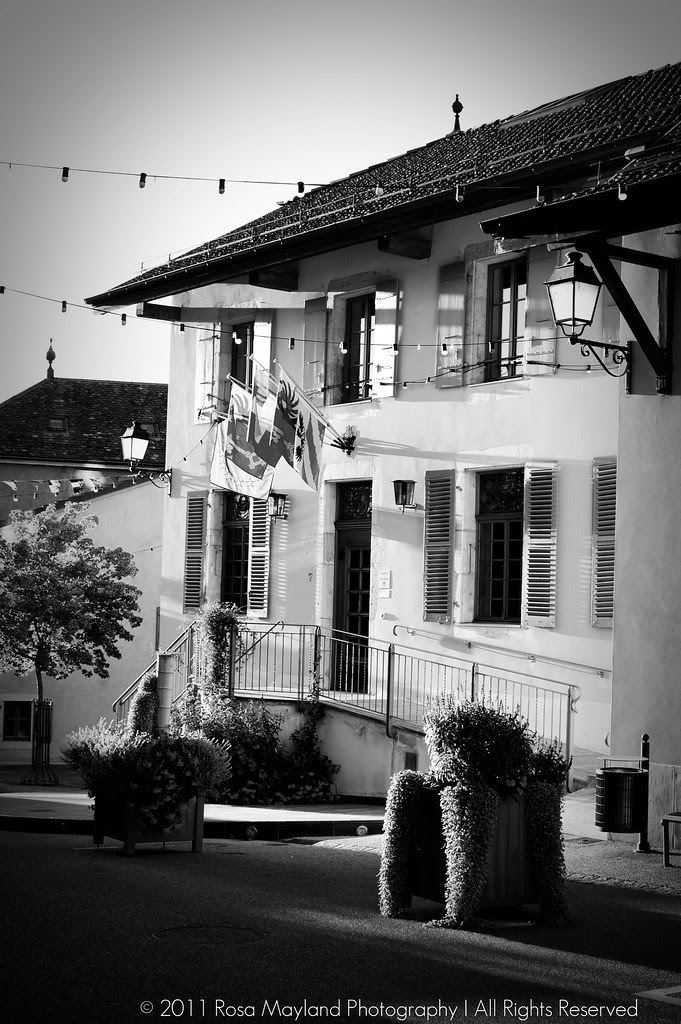 6. On a lightly floured work surface, roll the dough into a rectangle about 23cm x 32cm.
7. Spread with the damson compote, making sure you leave a 2cm border all around the edge and sprinkle with the orange zest.
8. Moisten the borders with either cold water or milk.
9. Roll into a tightish cylinder or sausage shape, starting with one short end (23cm).
10. Pinch the ends to seal in the jam.
11. Lay the roll in the centre of the baking paper, making sure the seal is underneath.
12. Bake for 45-50 minutes, or until the roly-poly is golden brown.
13. Let it rest for about 5 minutes before serving.

Comments:
If you don't want to use pork suet, then you can either replace it by coconut butter (vegetarian), cold beef or duck fat (kosher/halal).
By letting the roly-poly rest for 5 minutes, you ensure the jam to not come oozing out of the roll when you cut it. 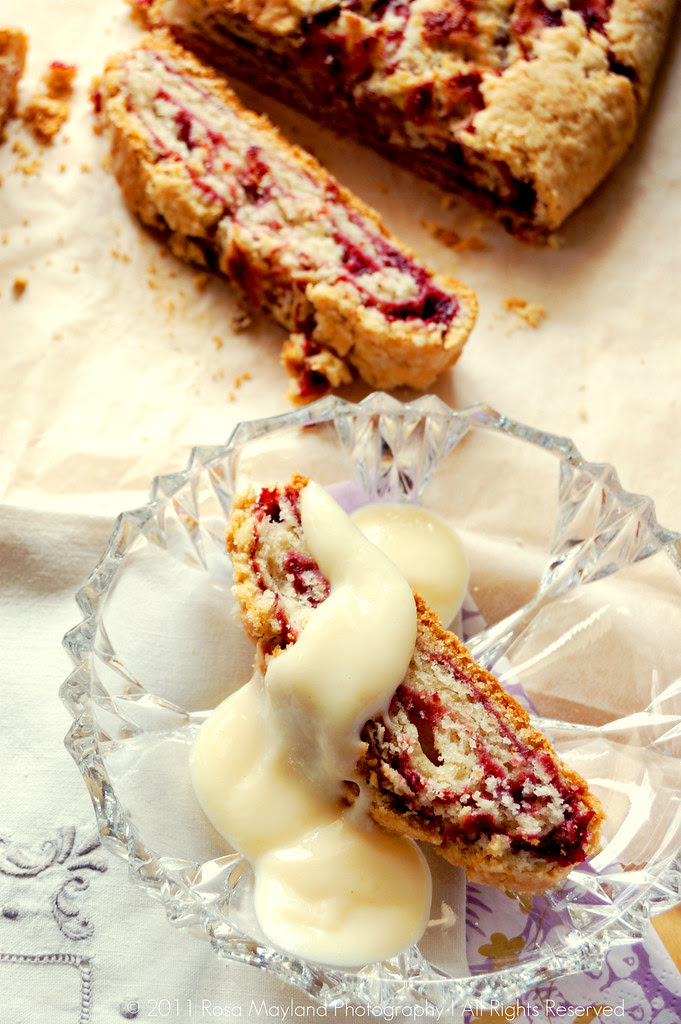 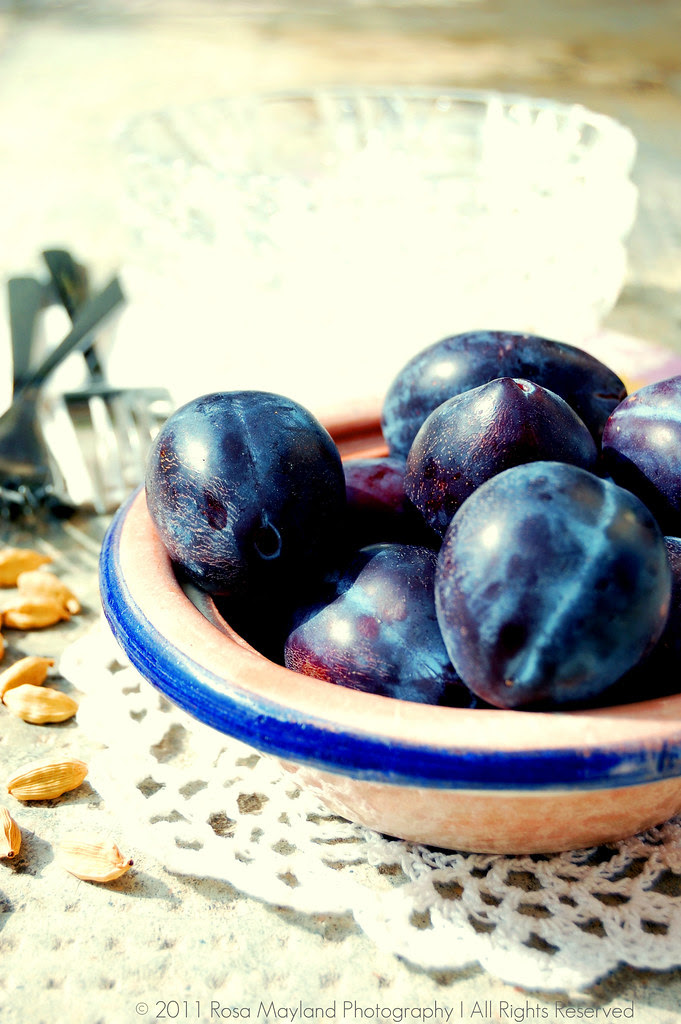 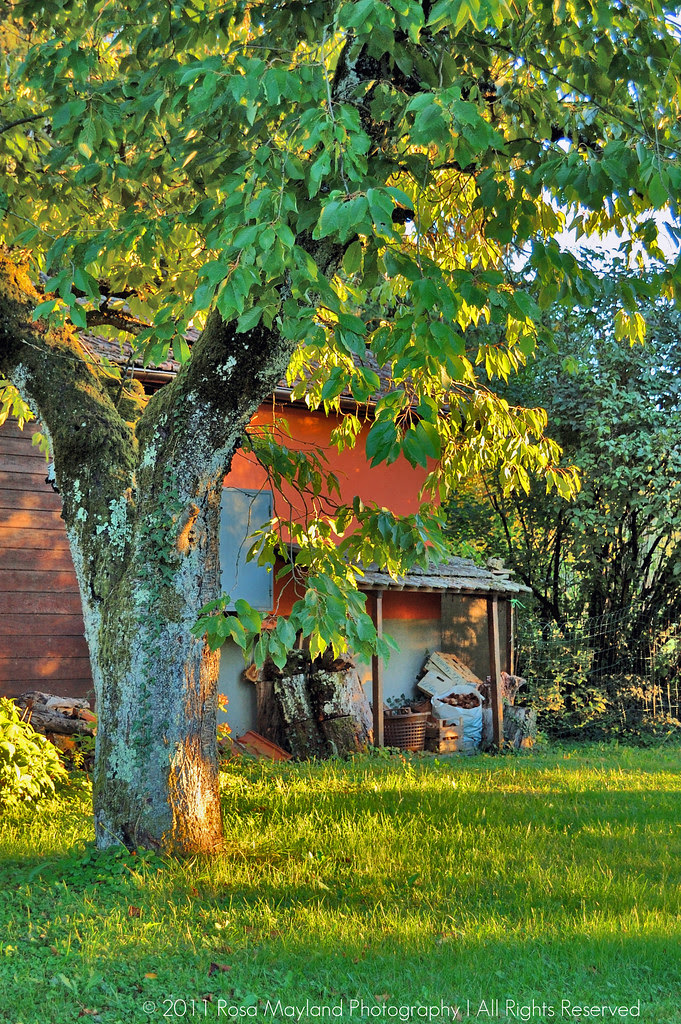