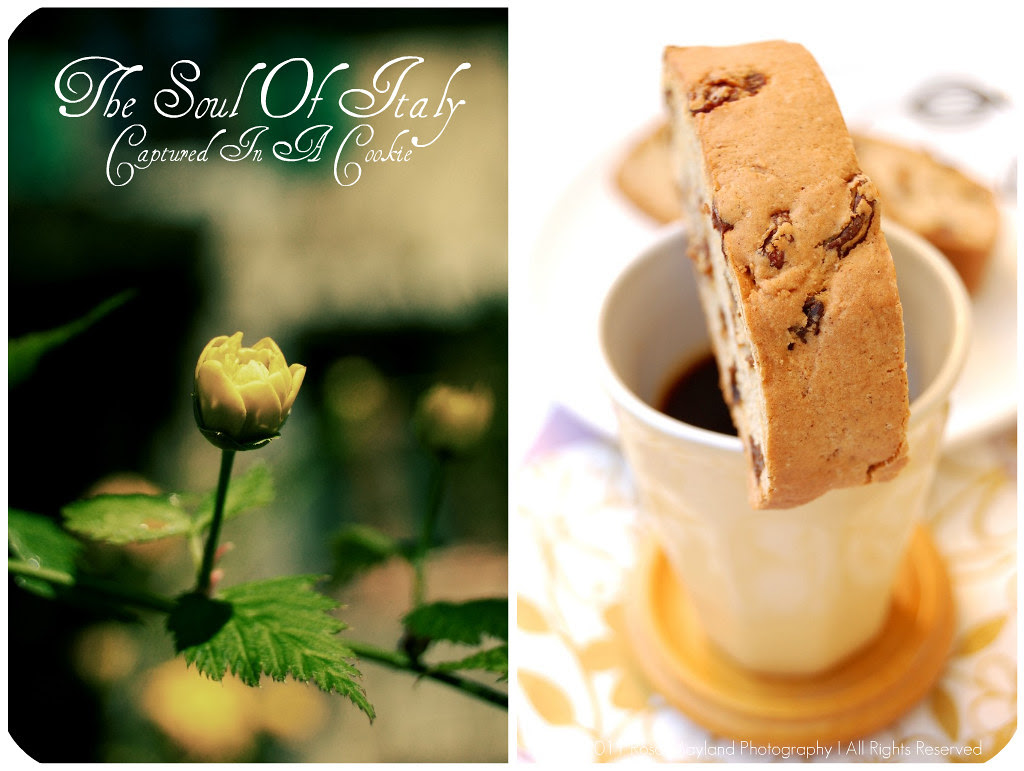 "Biscotti" (pronounced "bee-scoat-tee") are relatively new to me. Actually, a few years ago (about 6 years ago) I had no clue what they were. That is quite understandable if you consider the fact that I've lived all my life in Switzerland and never travelled to Italy (I passed through that country when going to Greece, but I doubt that this can qualify for holidays) nor to America where this speciality is widespread...
I was introduced to these Italian cookies when I received James McNair and Andrew Moore's "Afternoon Delights" for my birthday in 2003. It was love at first sight. The very second I lay my eyes on the picture that illustrated their "Almond Biscotti" recipe I knew that I had to bake them immediately in order to satisfy my curiosity. Since then I have not seized being a big fan of this crispy treat.

Before I moved away from home and started cooking for myself, I had never really tasted any Italian pastry apart from "Amaretti Macaroons" and knew absolutely nothing about "Biscotti". Here in Switzerland, the only biscuits that can be compared to them are oven-dried brioche slices called "Zwiebacks". Although they taste more like sweet bread than cookies and are far from being as sweet or having an identical shape, I always enjoyed eating those delicious rusks.

The reason why I like "Biscotti" so much is because they remind me of "Zwiebacks" and bring back memories of my Vaudois Pépé & Mémé (grandpa & grandma) whom I lost long ago - my granny died at the age of 92 in 1992 and my granddad passed away at the age of 98 in 1998.

I will never forget the times my parents and I visited my grandparents in Champvent. Since we had no car, getting there was a real journey and it was so exciting for the kid I was. After having rode on the InterCity for a good 45 minutes we then arrived in the little city of Yverdon-les-Bains where we hopped on the cute scenic Yverdon-Sainte-Croix train which I was really fond of the bumpity bump sound that the wheels made and adored it's haunting hoots. This filled me with intense pleasure and send shivers down my spine. As it rushed speedily through the lush countryside (it was going so fast that we had to hold on tight to the bars), went through thick and dark forests and stopped in dainty stations, I could not have been a more happier girl. I felt like an adventurer on a mission in a far away land. This feeling grew even stronger when we stepped out of the train in the middle of nowhere in Essert-sous-Champvent. Our trip hadn't ended exactly. This location was situated at least 20 minutes by foot from our destination which meant that we still had to take a 2 kilometers hike through the fields in order to arrive in the village and finally step a foot in my grandparents' house.

In the good old days (in the 90's - that makes me sound old, I know...), Switzerland was a safe place to live and nobody used to lock themselves in (it is still quite secure, but not as much as before - now we have our share of extreme violence too). In the rural areas people even left their front door wide open during the summer. So, to enter my grandparents house there was no need to ring the doorbell or knock. We simply stepped in the corridor and were immediately welcomed by an ethereal smell of food and went straight to the kitchen where my grandmother, who was a brilliant cook, was preparing our 100% homemade lunch which generally consisted of a seasonal soup (onion soup, nettle soup, potato soup, etc...), a salad (homegrown lettuce or hand-picked dandelion leaves), either a stew ("Lapin A La Crème"/Rabbit in Sour Cream & Mustard Sauce - the rabbits were raised and butchered by my grandfather) a "rôti" (roast) or a "bouilli" (beef from which bouillon or soup has been made) and meringues with thick golden cream scraped from the top of the milk basin (until the 90's my grandparents bought all their cheese, milk and butter from the village dairy - just like in the past), canned sour cherries and Kirsch (I had that too and loved it eventhough I was a child. As you can see it didn't turn me into an alcoholic or kill me...).

After lunch both my grandparents had the habit of napping for about one hour after each meal (was it the key to their longevity?) and then getting on with their daily chores (housework and taking care of the garden). Generally, while they were working, we went out for long walks around the area which is considered to be Vaud's "granary" and abound in walking excursions as well as picturesque villages with Medieval manor houses and castles. The rustic Gros-de-Vaud landscapes are delightfully pastoral, so soft and inviting. 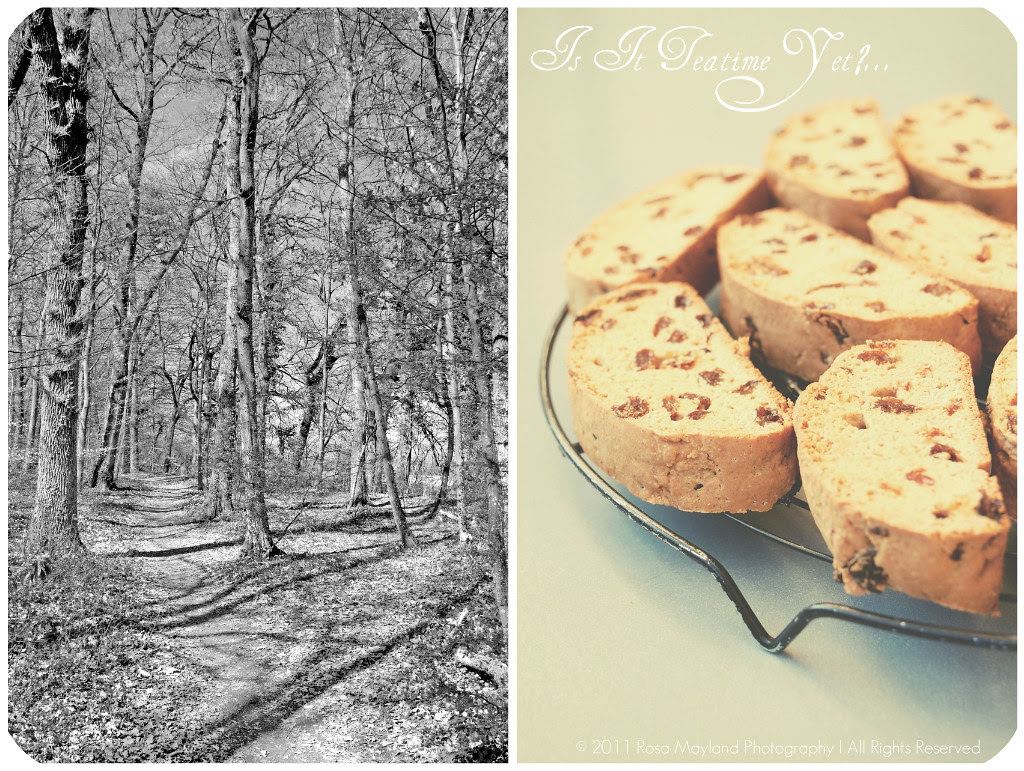 When we came back, we were always greeted by either a "Salée A La Crème" or a "Gâteau" (people in Vaud commonly use the term "Gâteaux" to describe "Tarts") made with homegrown fruits (berries of all kinds - check out my "Blackberry Tart", apples and rhubarb - not a fruit, I know). Our little trip had made us extremely hungry, so those freshly baked and mindblowingly ambrosial delicacies were accepted with much enthusiasm. My grandmother's pastries were some of the best I have ever eaten. My Mémé was an extraordinary homecook and baker who made amazing dishes from scratch, prepared to most gorgeous family-style "Cuisine Bourgeoise" (pronounce "kwee zeen boor jwaz" - it refers to plain, but good down-to-earth cuisine), taught my 20 years old mother the basics of cooking/baking and showed her how to put a meal together.

My grandmother might not have been a woman who expressed her feelings, but she was always generous when it came to filling our stomachs. I cannot recall having ever starved while staying at my gradparents' home. I guess it was her way of showing that she cared for us. As we all know, "love goes through the stomach"...

Sometimes, if I was craving more food in the afternoon, my grandmother gave me a few "Zwiebacks" to nibble on. Those were generally eaten for breakfast in place of bread, but as a child I preferred to snack on them. Since then, that item is closely linked to that period of my life.

So, in addition to awaking memories of my Mémé, "Biscotti" are nooks which also remind me of the Renaissance. I like to imagine that noble women and men dressed fashionably with romantic-looking custumes made of rich fabrics (silk, velvet and muslim) sat on their terrasses overlooking the fluid green hills of Tuscany and chattered courteously while dipping their crunchy crullers in Vin Santo. Just like the scene in a Botticelli fresco!

~~~~~~~~~~~~~~~~~~~~~~
"Biscotti" are also known as "Cantuccini" or "Biscotti Di Prato". They are supposed to hail from the city of Prato in Italy (similar cookies exist in France - "Croquignole" - and Spain - "Carquinyoli" -) and their name comes from the Medieval latin word "biscoctus" meaning "twice-baked/cooked". It seems that hundreds of years before being consumed by sailors and adventurers in the 15th century (both Marco Polo and Columbus are supposed to have brought "Biscotti" with them on their journeys), they were already being eaten by the Roman Legions. They were enjoyed by travellers of all kinds is because they had good keeping properties (they lasted for a long while without going bad).

At the origin, those crullers were flavored with aniseeds, but nowadays, many sweet and savory variants exist (chocolate, candied fruits, pumpkin, raisins/currants, dried cranberries, cheese, olives, herbs, nuts of all kinds, different types of flour, etc...). "Biscotti" are very popular in their country of birth, but are also much appreciated by cookie lovers all over Europe and the USA. Recently, they have become very trendy and it is not difficult to buy them from bakers, coffee shops or supermarkets anymore. Although they are all generally rocklike in texture, it is to be said that some of them vary in rigidity. The Italian "Biscotti" are harder and denser than their American cousins which are lighter are more tender, thus still being appropriate for dipping.

The recipe I have decided to publish today was adapted from "The Cookies Companion" by King Arthur Flour. Having not tested that many different "Biscotti" as I tend to use the same recipe over and over and being somebody who is an amateur of spices, I thought that a little change in the routine might be good, so it is all naturally that I was drawn towards KAF's "Italian-Style Cinnamon And Raisin Biscotti".

Despite the fact that one has to have healthy teeth to bite into this confection and feels a little like a horse champing on dry bread when masticating on it, it is nonethelss terribly addictive. The dreamlike aromas of cinnamon and vanilla blend perfectly well with the molassy flavor of the rasins, thus making those lightly sweet "Biscotti" extremely palatable.

A fabulous breakfast, teatime or evening treat that must be on every Easter table, especially if they are dunked into warm melted chocolate! 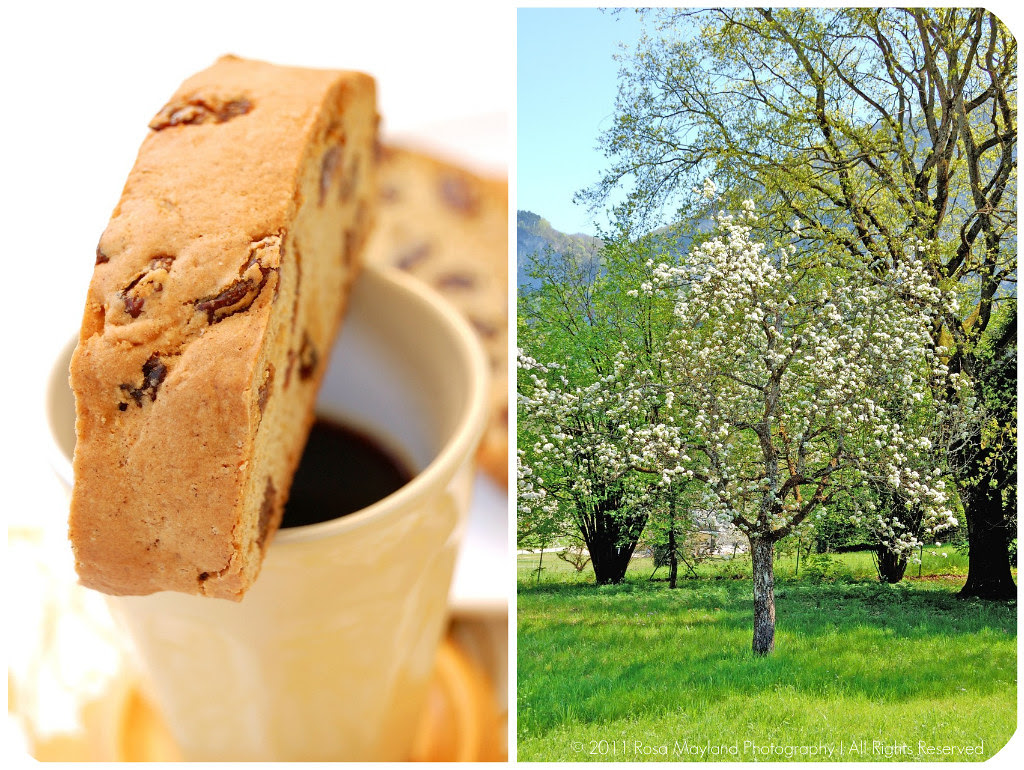 Method:
1. Preheat the oven to 180° C (350°F) and lightly grease a baking sheet (or line with parchment or a silicon mat).
2. In a medium bowl, mix the cinnamon, raisins and flour together. Set aside
3. Combine the eggs, sugar, baking powder, salt and vanilla bean paste in the bowl of a stand mixer. Beat on medium speed until the mixture is light in color and falls back into the bowl in ribbons if you lift up the beater blade.
4. Reduce the speed of the mixer to low and gradually add in the flour. Mix just until the flour is fully incorporated.
5. Transfer the dough to the baking sheet and shape it into a flat loaf (14 inches/35cm long and 2.5 inches/6cm large). 6.Bake for 25 minutes, then remove the baking sheet from the oven and reduce the oven temperature to 170° C (325° F).
7. Allow the baked loaf to cool for about 15 minutes.
8. Mist the loaf lightly with water and let it rest for another 5 minutes (this will help to prevent it from cracking/crumbling when slicing).
9. Once the loaf has rested, transfer it to a cutting board and use a serrated knife to slice the biscotti (diagonally to produce long biscotti or horizentally if you want smaller biscotti).
10. Return the slices to the baking sheet (standing up) and bake for an additional 20 – 25 minutes.
11. Transfer the slices to a wire rack and let cool completely.

Remarks:
You can replace the raisins by other dried fruits or nuts (chopped coarsely).
If you wish, subsitute the cinnamon with any other spice of your choice.

Serving suggestions:
Eat for breakfast, teatime or as an in-between snack and accompany with a good capuccino, espresso, a small glass of Vin Santo or Porto.
You can also dunk them in melted chocolate. 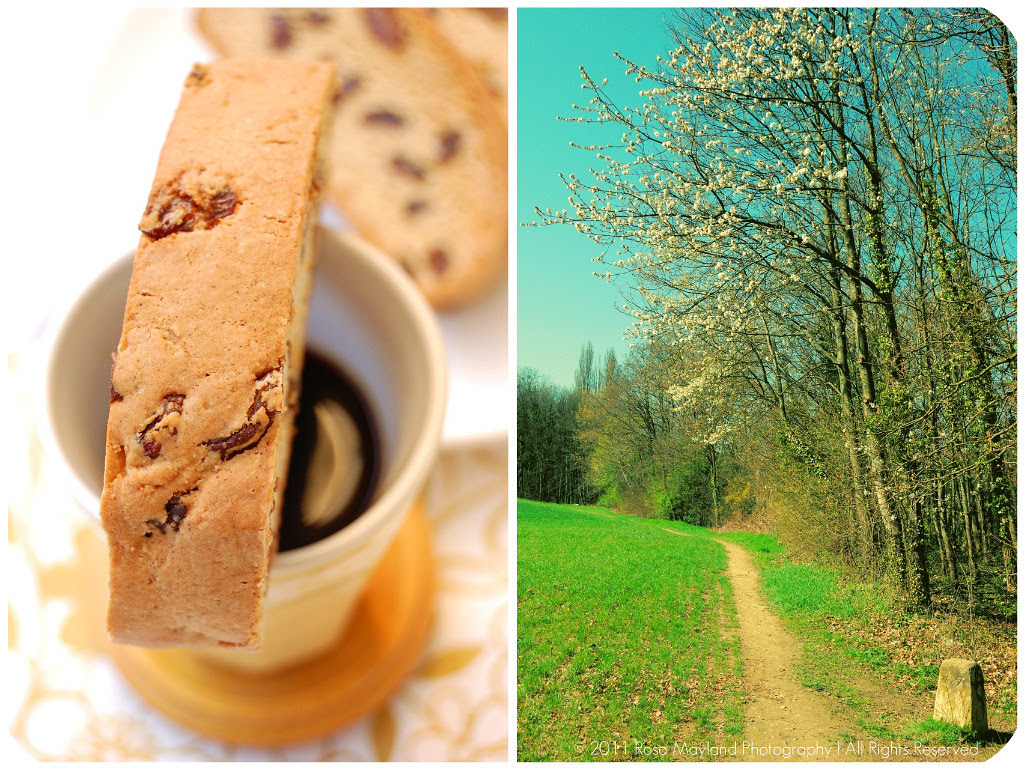 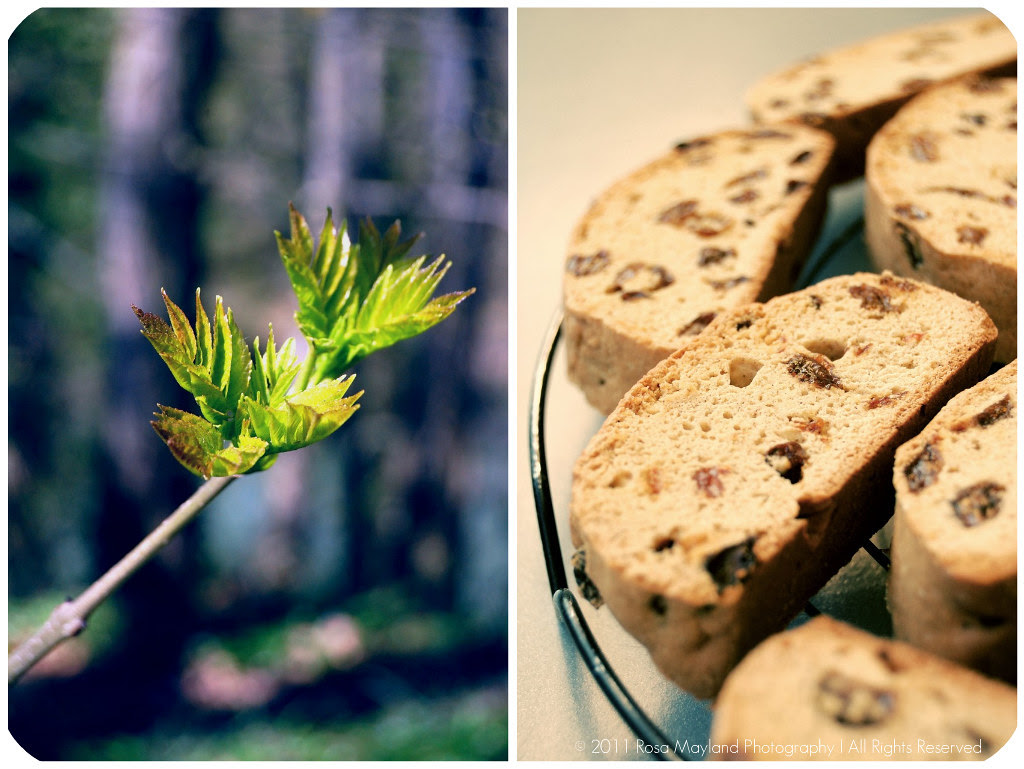 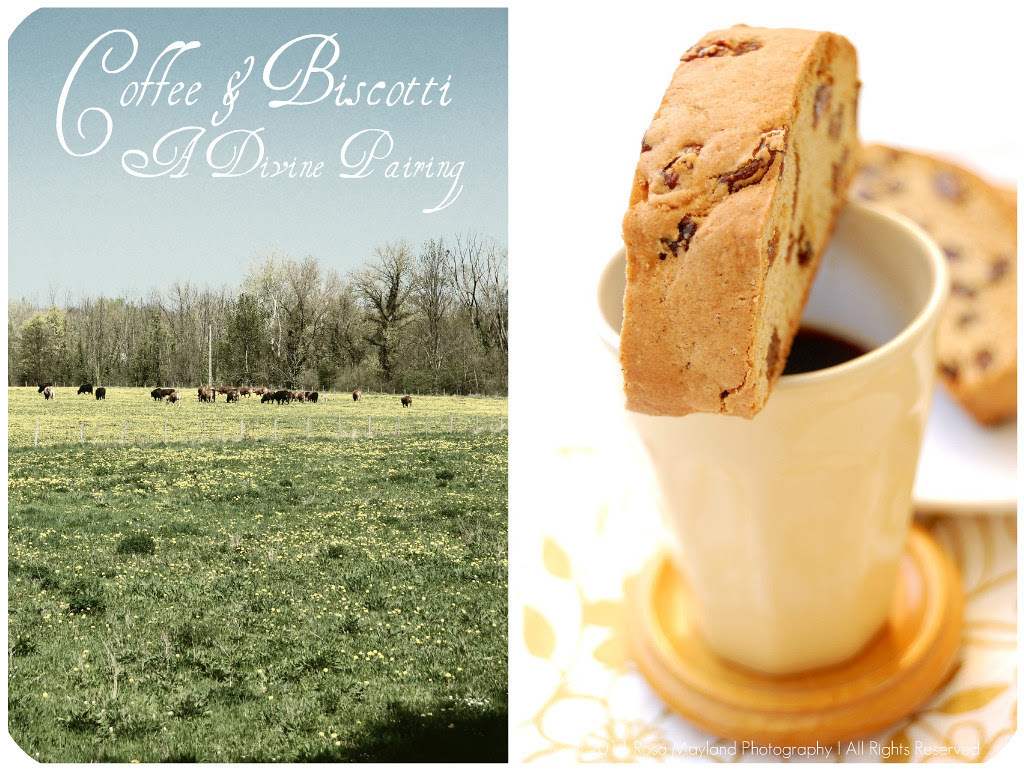