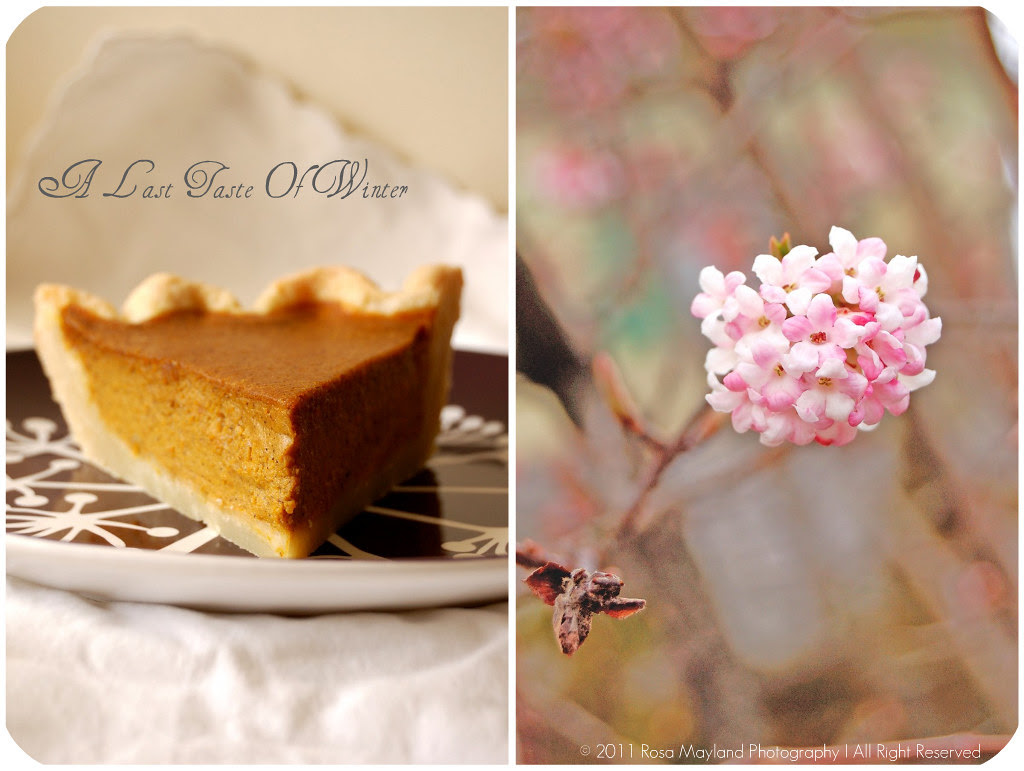 Today, I wish to dedicate my post to my beloved English grandmother Jean Margaret Robinson (née Cutts, 13.09.1927-18.02.2011) who passed away peacefully on Friday the 18th of February 2011 at the age of 84, nearly two years after my grandfather death. She was the last of my grandparents and my only link to England, the country where my heart belongs and my second home (I have dual nationality).
I might not have had a very close or deep relationship with her, and although still wonder what she thought of me or if she loved me (unfortunately, the members of my family have never been known for expressing or showing their feelings) she has had a big influence on me as she was an admirable cook and baker who always delighted everybody with her divine creations. Eventhough she was not the attentionate, generous and present grandmother I dreamt of having, I will always remember her for being a remarkable person when it came to handling the pots and pans or to whip up the most palatable Sunday roast.

I particularly respect and thank my Nan for having been extremely talented in the kitchen and for being my culinary guide. She was a person who showed me what traditional British food is supposed to taste like, whose cooking skills I have always wanted to acquire and whom I considered an authority in all things gourmet. She was clearly gifted in that domain (not only though - she also mastered other arts like painting, knitting, working with silver, etc...). I am so glad she indirectly motivated me to develop my craftiness for all things food-related. I really hope that from the heaven's above my granny is happy to see that I have surpassed her as a cook/baker and she is pleased with the adult I have become...

Unfortunately we have not spent much time together. My grandma was never enclined to share a moment of complicity with granddaughter. She rarely showed me how to prepare food and hated having me "in her feet" when she was busy making dishes or baking cakes. In those moments, my grandmother didn't want to have a kid around her.

The only memory I have of me actually baking with my granny is when I begged her to make "Coffee Kisses" cookies with me. As I had a little tantrum and whined a lot, Nana reluctantly gave way to my wish and accepted to show me how to prepare that divine treat. She didn't know that more than 20 years later I'd be blogging about that exceptional event and fondly cherishing that memory... 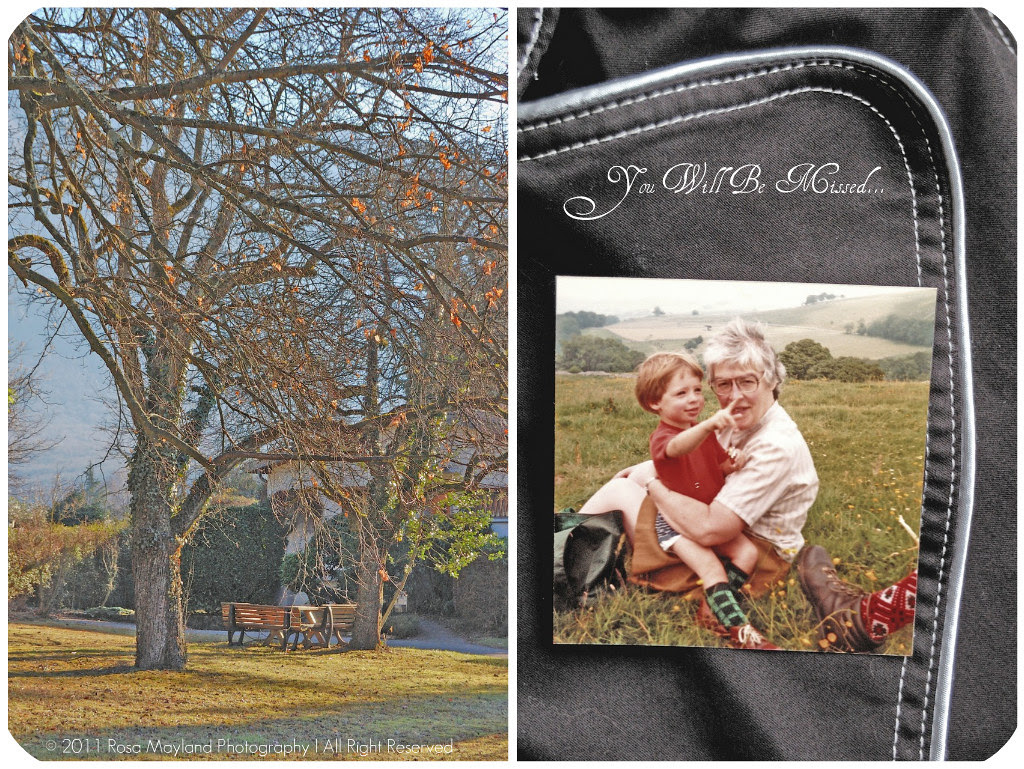 ~~~~~~~~~~~~~~~~~~~~~~
My post being about endings and new beginnings, it is all naturally that I will present a recipe which marks the conclusion of wintertime and the commencement of spring. By baking the last "Pumpkin Pie" of the cold season, it is my way of celebrating the circle of life, the endless passing of time and the complimentarity of life and death.

Last October I bought a few pumpkins to decorate my balcony table. They have kept very well and were exposed there until last week. Now that the nights are less cold and the days are a lot warmer, they have started to rot so as I hate to throw away food I decided to use my two small Japanese chestnut pumpkins ("Potimarron" in French) in order to put together a classic American "Pumpkin Pie".

As a child I was not keen on eating my mother's "Pumpkin Tarts" ("Tarte A La Courge", the Swiss equivalent of "Pumpkin Pie"), yet now I am very fond of that speciality. I remember that Fridays were officially called "tart days". A time of the week I particularly looked forward to as the weekend was very close (though I had to go to school on Saturday mornings, till 12pm) and we got to eat yummy stuff then.

My mother's seasonal tarts were always greeted with much excitement, but the only time I was a little less than thrilled by what was awaiting us at the dinner table was when "Pumpkin Tart" was on the menu. One of the reason why I had a certain aversion for that treat is because the pumpkin used wasn't the kind you'd make sweet desserts with, but rather savory dishes. It had too much of a vegetable flavor to be enjoyable. The other reason is that my parents were never big fans of hyper spicy pastries (my mother only incorporated a little nutmeg and cinnamon to her filling) and unlike Americans, they especially disliked using cinnamon with a heavy hand. So even if her tart was made with quality produce (pumpkins from the market) and double cream it lacked a bit of oomph as the filling was not as luscious and rich-tasting as the one of the US "Pumpkin Pie"...

Now that I bake my own "Pumpkin Pies" I can fully enjoy that confection and play around with aromas. A few years ago I blogged about my own adaptation of a recipe I found in the book "Culinaria US" (please forgive the bad picture!) and while it is quite flawless it doesn't mean that I am not interested in trying other recipes. After all I am a foodie who cannot stop being in search of perfection.

So, after having eyed an attractive "Pumpkin Pie" recipe in my new "Tartine" cookbook, I decided to see what it was worth. Well, I wasn't deceived by the end result as my boyfriend and I had no problem polishing off the pie dish within the next 48 hours.

As usual, I adapted it to my taste and replaced the brandy by rum, incorporated more salt to the pastry and added some additional cinnamon to the filling. Needless to say that Tartine Bakery's "Pumpkin Pie" was divine. It was not overly sweet, lusciously custardy, delightfully spicy, pleasantly earthy, wonderfully moist and had a refined flavor as well as a marvelously flaky and buttery pastry. In spite of being gorgeous I must point out that I might surely add a pinch of allspice to the filling the next time I bake this pie... 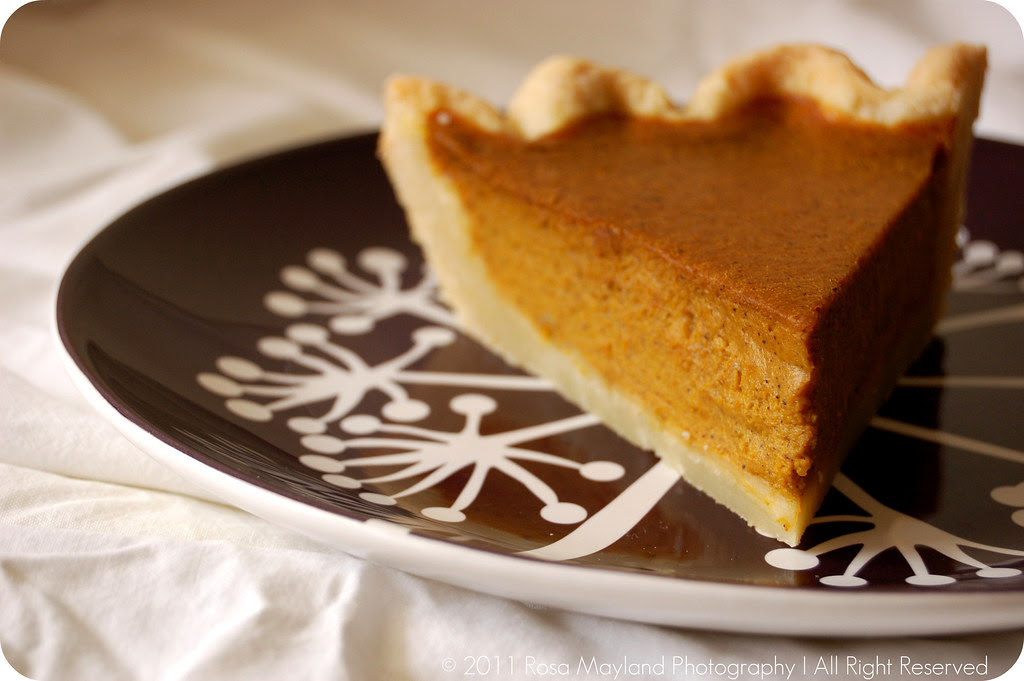 Recipe adapted from the book "Tartine" by Elisabeth Prueitt and Chad Robertson.

Method for the "Flaky Pie Crust":
1. Place the flour and salt in a big bowl.
2. Add the butter.
3. Using a pastry blender, cut the butter into the flour until you obtain a mixture ressembling coarse sand.
4. Pour the water over the crumbly mixture. Stir and toss with the help of a knive until the dough starts to come together.
5. Continue mixing (very gently) until you obtain a ball of dough which is not completely smooth. 6. On a floured surface, divide pastry in two, shape into a 2.5cm (1-inch) thick disk and wrap in plastic film.
7. Put in the fridge and let rest for about 2 hours or overnight.
8. Roll out one of the disks on a lightly floured surface to a thickness of 0.3cm (1/8 inch thickness) and from the center toward the edge in all directions, without forgetting to lift and rotate the pastry a quarter turn every now and then.
9. Once your pastry is a circle 1 1/2 inches larger than the tart pan, carefully transfer it to the buttered pan (folding in half, if necessary).
10. Ease it into the bottom and sides of the pan and pressing into place. Trim the edge with a knife.
11. Prick the bottom of the pastry with a fork, line with baking paper and fill with pie weights or dry beans.
12. Preheat the oven to 190° C (375° F).
13. Bake blind until the surface of the dough looks dry and has no opaque areas left, about 20 minutes.
14. Remove from the oven and remove the paper as well as the weights/beans, then return the shell to the oven for an extra 2-5 minutes (if the center starts to rise, gently pierce with a knife tip).
15. Let cool completely on a wire rack before filling. 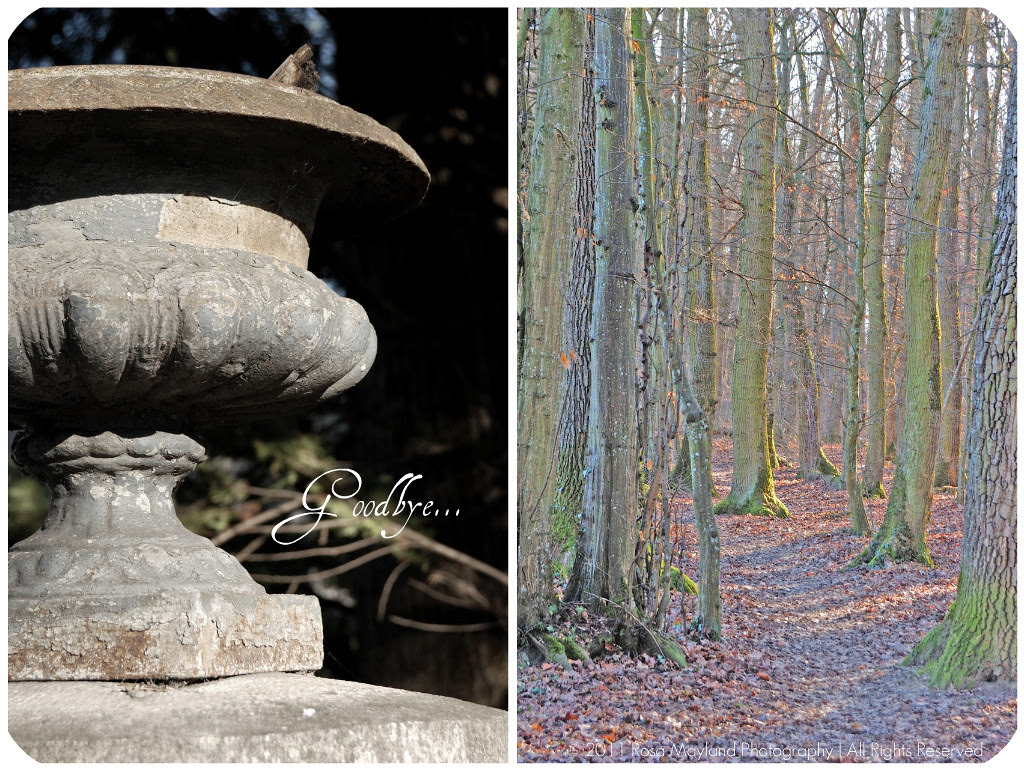 Method For The "Pumpkin Filling":
1. Preheat the oven to 160°C (325°F).
2. In a medium bowl, whisk together the pumpkin purée, whole eggs, egg yolk, cream and rum until smooth.
3. Add the the sugar, spices and salt. Mix until well blended.
4. Pour the filling into the pie shell and bake for about 1 hour, or until the pie is just set but the center is ever so slightly jiggly (the filling continues to set as it cools).
5. Cool completely on a wire rack.

Remarks:
Make sure that you pumpkin purée is not too wet. Cook it a bit longer to let the liquid evaporate or place in a sieve overnight in order to get rid of the excess moisture.
If you wish you cxan replace the rum by brandy, cognac, whisky or sherry.
You can add a little more sugar to the filling if you find that it is not sweet enough. 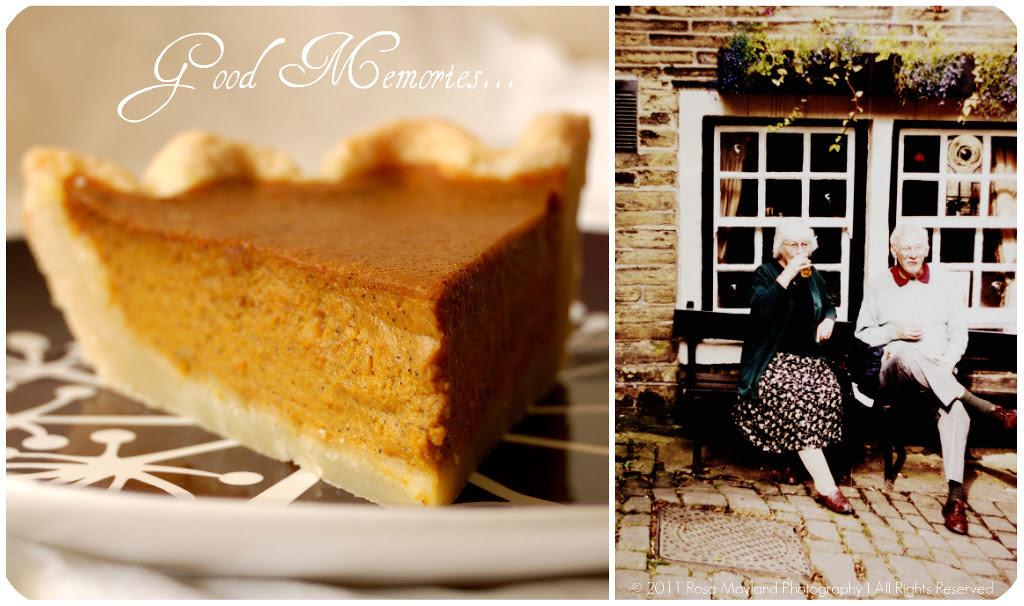 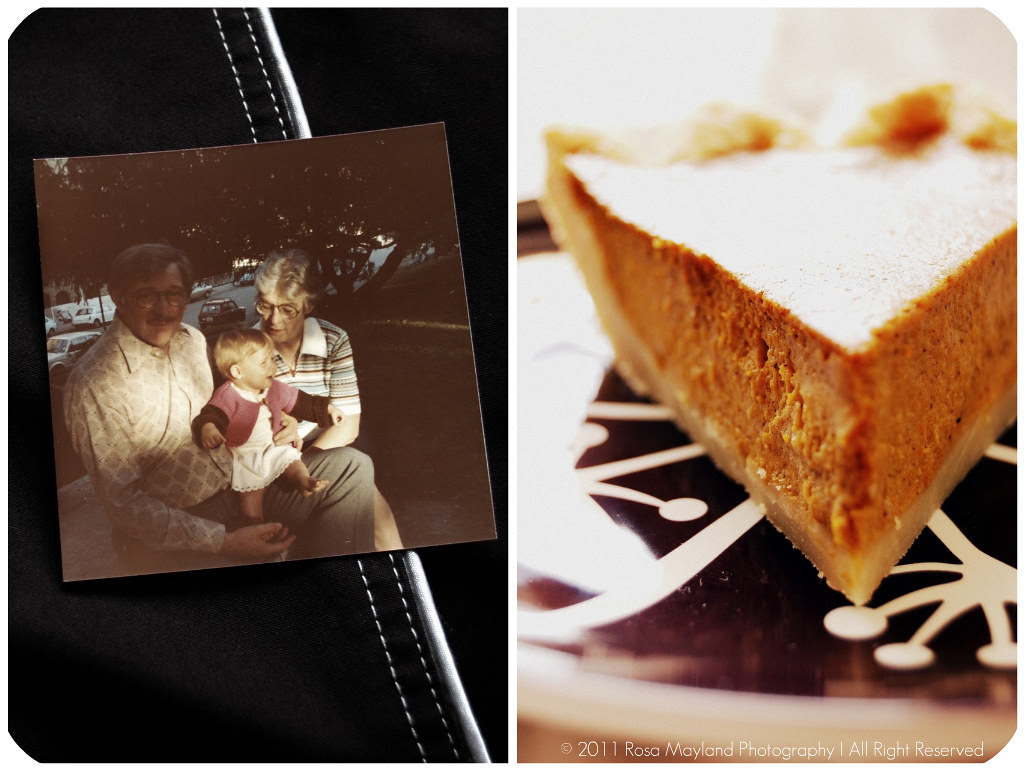 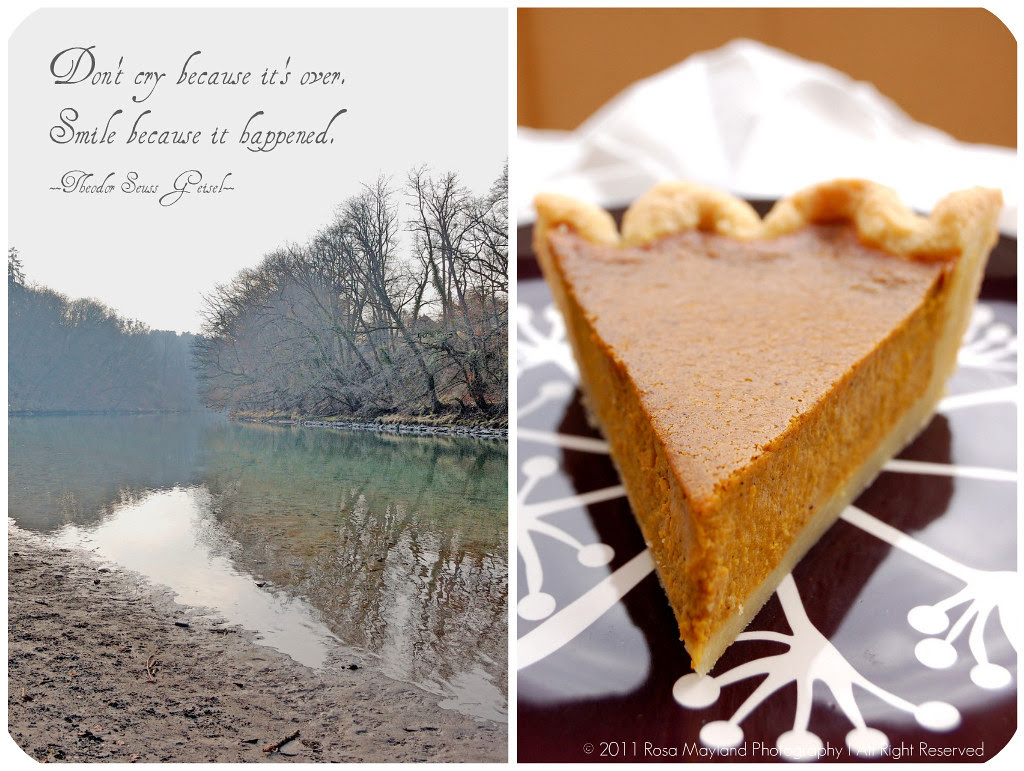