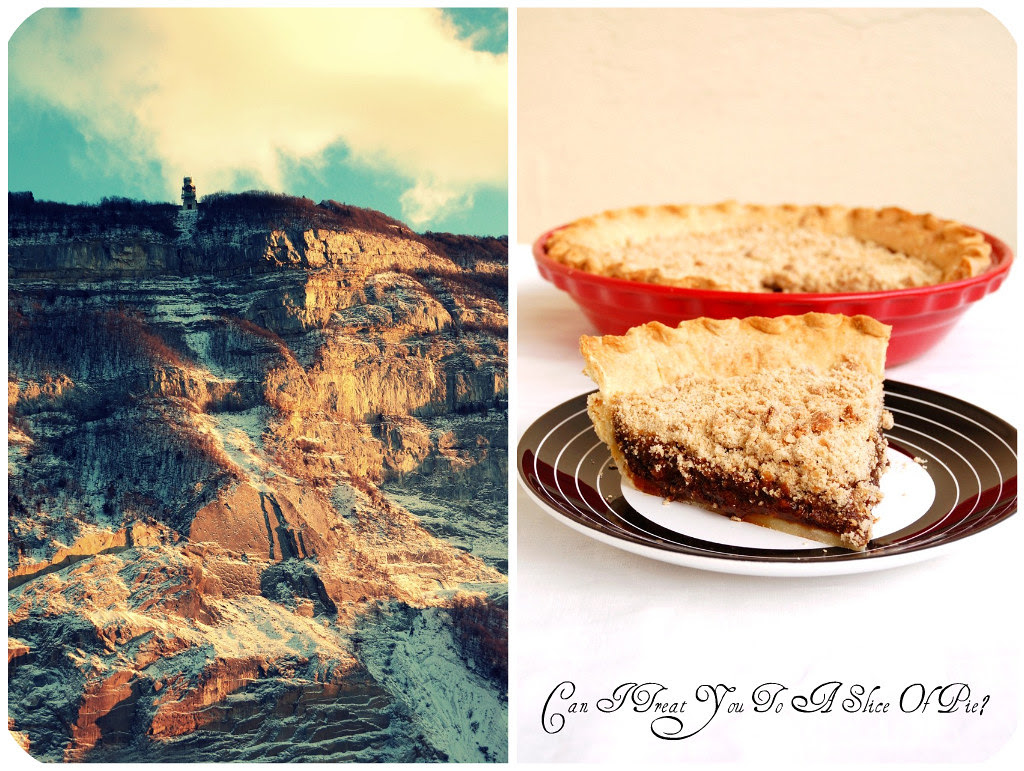 I've always been a big lover of pies. Having been born into an Anglo-Swiss family this pastry has never been unknown to me. As a matter of fact our table was regularly graced by pies of all kind...
Since I have English roots the pies that we ate were exclusively of the British kind. The ones my mother and gradmother made were mostly composed of fruits (apple pie, black currant pie, gooseberries pie, lemon meringue pie, etc...) or meat (steak & kidney pie, pork pies, etc...). American pies were unknown to us and it is only when I started baking for myself and developping a strong interest for the US cuisine as well as it's culture that I ate my n°1 New World pie. Conquered by this land's baked goods I broadened my culinary horizon by preparing more of them (pumpkin pies, pecan pies, sweet potato pies, cream pies, etc...).

It has to be said that with ferociously monarchy-worshipping and patriotic grandparents who entertained that very typical old-fashioned and unreasonable British chauvinist thought pattern (that thankfully only a small bunch of people entertain in the UK) and parents who had a bad conception of America (mainly politically and usually in a narrow-minded manner - lumping everybody in the same group) there was no way I would have come any close to the wonderful gastronomy of this country (we did eat homemade hamburgers, though LOL). In both my house and my grandparent's America was a taboo subject.

Anyway, I might share the same blood as my family and be proud to have English origins, but I am far from having such stubborn, conservative and bigoted opinions. Great Britain's kingship and colonial history means nothing to me - I despise it - and I refuse to judge an entire nation by it's leaders. I know better than that...

Since the tender age of 6 I have fed a passion for the USA. It started when I began reading the cartoon book Yakari and when my admiration for Native Americans was born. Then, it grew a little bigger as I began discovering Heavy Metal music and became besotted with my favorite bands whose musicians I worshipped. Finally it reached a higher level when I embarked on my culinary journey in 1998 and discovered the world of blogging in 2003.

Being a foodie and feeding an interest for all things cultural that are linked to the States it is quite naturally that my knowledge of traditional American food expanded with the years. Not only do I love surfing on US blogs, but I also appreciate reading cookbooks by writers/bakers/cooks hailing from the "Land of Opportuinity" and being in contact with people who come from this part of the world as generally they are far more laid-back, easy-going and accessible than the Swiss folks. That is how I read about "Shoofly Pies" for the first time.

I find the name of that pie, it's origin as well as it's composition very intriguing. So after years of promising myself that I would try making it I finally transposed my wishes into reality and created my own "Shoofly Pie" recipe.

This molasses pie comes from the Pennsylvania Dutch who are descendants of Germanic emigrants originating from Southwestern Germany and Switzerland, but it is also rooted deep into the Southern culinary traditions. Apparently it holds it's name from the fact that it attracts flies that have to be "shooed away". This speciality shares simiarities with "Montgomery Pie", another Pensylvanian treat that varies very slightly in it's composition (lemon juice added to the molasses filling and instead of being topped with crumble it is garnished with buttermilk cake batter).

Traditionally this pie is made with sugar cane molasses, but as I love breaking the rules I decided to try something different and original. My version of "Shoofly Pie" can be quite surprising, yet it isn't extremely different to the original one.

Instead of making the filling with that backstrap by-product sugar beet or sugar cane which has quite a strong, tangy, spicy and bitter flavor I used carob molasses which has a milder, fruitier and sweeter aroma. This thick brown uncrystallized syrup is made by soaking milled carob pods (fruits from the carob tree) in water and then reducing the extracted liquid.

This fruit which is quite popular around the Mediterranean Sea (it is native of that region) can be employed as a sweetener, to make refreshing drinks, delicious spreads, cakes and desserts. It is very versatile, healthy, contains no fat, is rich in iron, calcium and nutrients.

During the 1970's it was used as substitute for chocolate. But, we all know that it is a terrible error to make a parallel between carob and cacao. Fistly, there is NO replacement for chocolate and secondly, carob has a flavor of it's own. If you expect it to taste like chocolate then you will be bitterly disappointed and will have a negative impression of it. It is for that reason that the tragic misuse of carob led people to hate and criticize it violently (I bet some of your still shudder with revulsion at the memory of eating those carob brownies that your hippy mom made LOL). I find that so sad as carob is such a valuable as well as unique product that cannot be compared to anything.

I am so glad to have integrated that delicacy into my "Carob Shoofly Pie" as it could not have been sublimed in a better fashion. I am particularly fond of the divinely earthy, nutty, slightly tangy, complex and delicate date-like fragrances the carob molasses confers to the pie.

The filling is marvelously gooey as moist, the flaky (no wet bottom here) crust's salty note contrasts remarkably well with the pie's overall sweetness and the crumble add's a perfect touch of spiciness and crispiness to the whole. What an amazing combination!

Needless to say that the "Carob Shoofly Pie" devoured hastily... 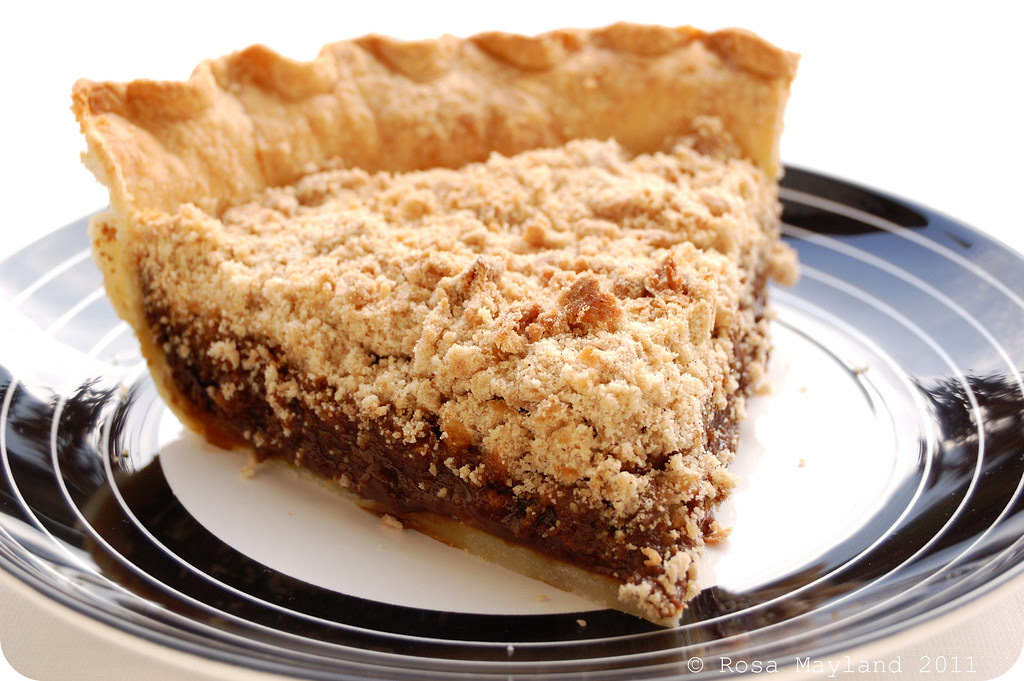 Method For "The Pastry":
1. Sift the flour and salt into a bowl/bassin.
2. Add butter and rub between the fingers until the mixture is flaky.
3. Pour in the water, gradually, while continuously cutting and stirring with a knife. Stop adding water when the dough is stiff. It should not be sticky or wet. Gather up into a soft ball and place it in the fridge while you prepare the filling.
4. Preheat the oven to 190° C (375° F).
5. Roll out the pastry on a lightly floured surface to a 33cm (13 inch) round.
6. Line your buttered 23cm (9 inch) pie dish with the pastry and trim the edges, then crimb them decoratively. With a fork prick the bottom of the pie.
7. Place in the freezer for about 10 minutes. 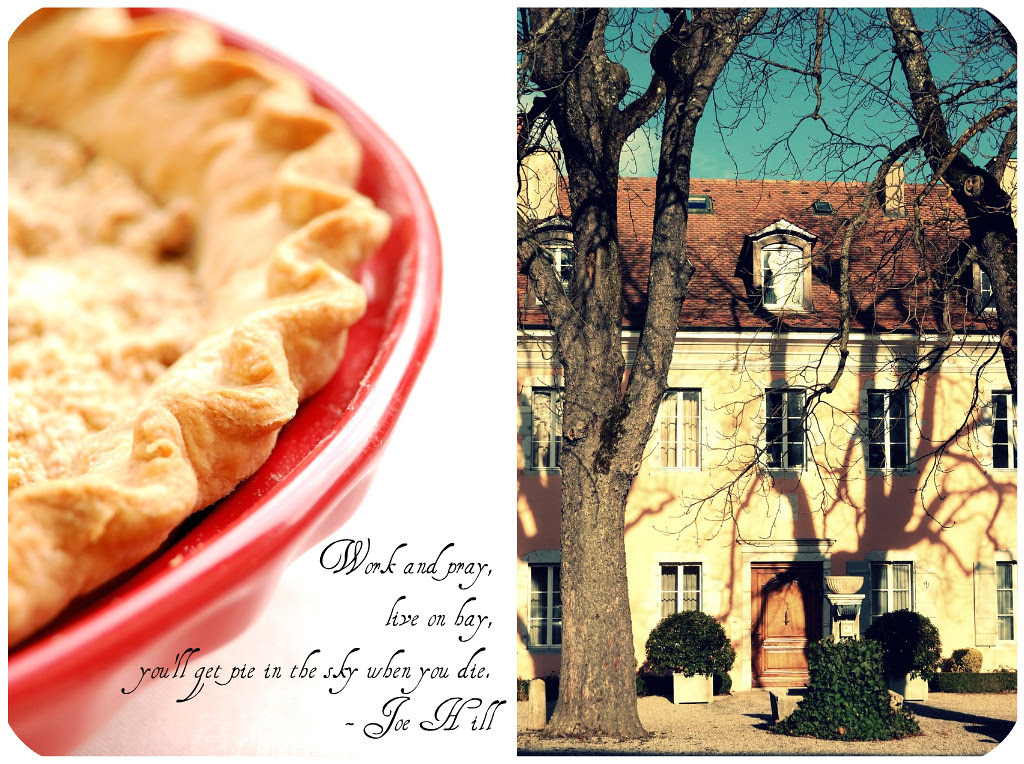 Method For The "Filling":
8. Meanwhile mix the milk together with the cornstarch (to dissolve it), then add the molasses and the egg. Set aside.
Method For The "Crumbs":
9. In another bowl combine the flour, sugar and cinnamon.
10. Add the butter and work it into the flour with a pastry blender. Add the water and continue the process until you obtain a crumbly mixture.
11. Pour the molasses mixture into the pie crust and spoon the crumbs on top of it.
12. Bake for 40 minutes.
13. Let cool on a wire rack.

Remarks:
Always lift the flour out of the bowl while rubbing; it makes the butter/flour mixture airy.
Be careful not to add too much water as the pastry should not be stick to the touch.
While mixing the water to the flour/butter mixture never work the pastry like a bread dough, otherwise you would end up with a stiff, hard and elastic pastry.
You can replace the carob molasses by any other molasses (apple, grape, pear, pomegranate or sugar cane molasses).

Serving suggestions:
Serve warm or at room temperature with a dollop of whipped cream. 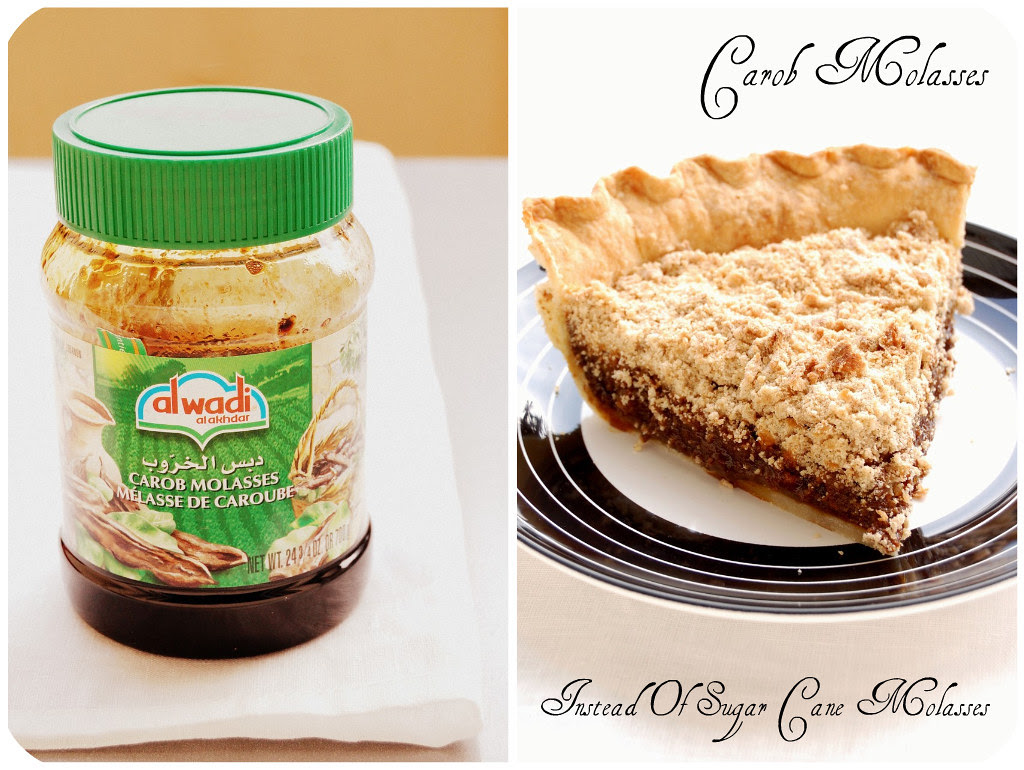 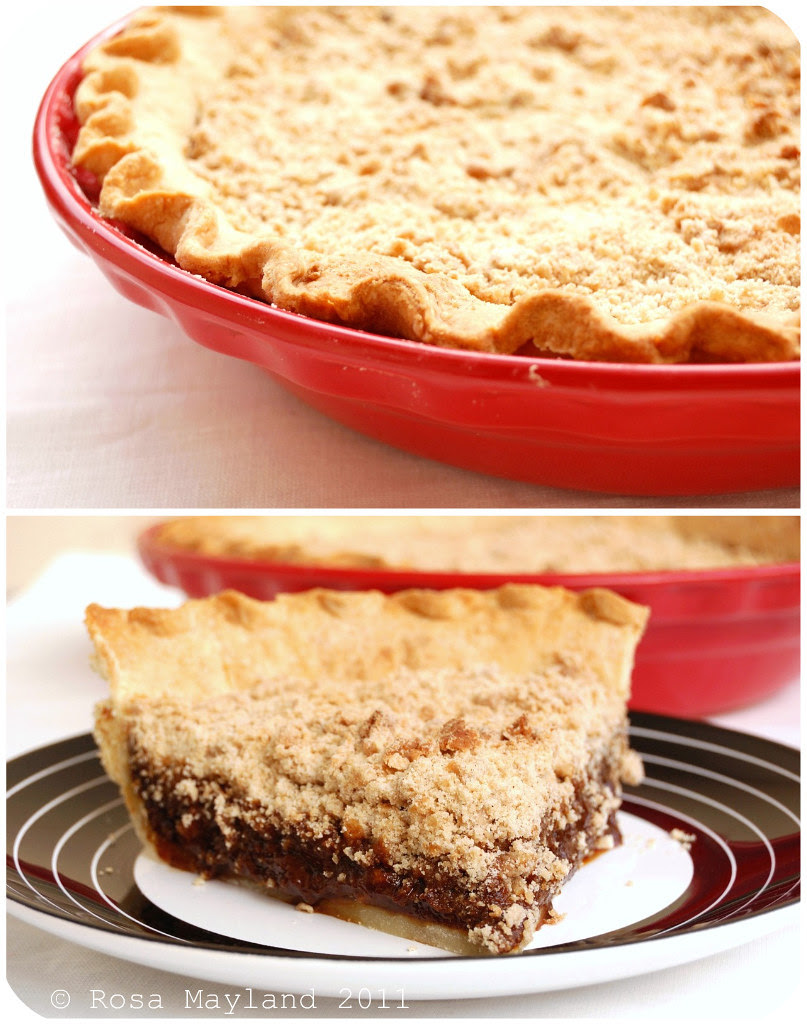 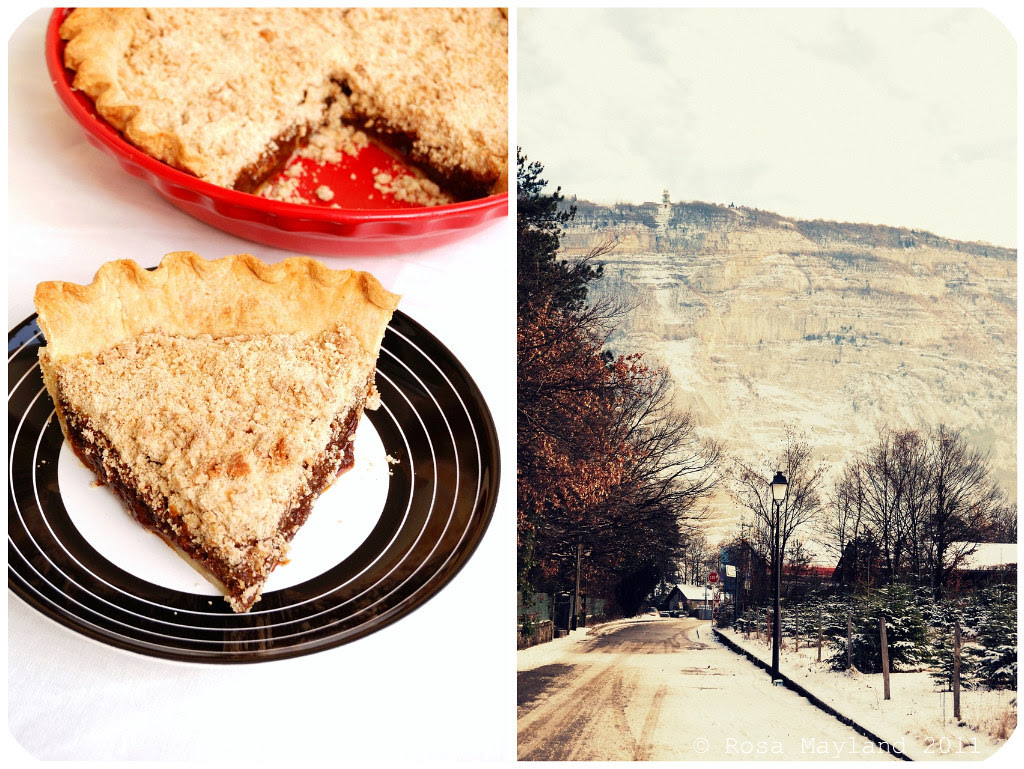