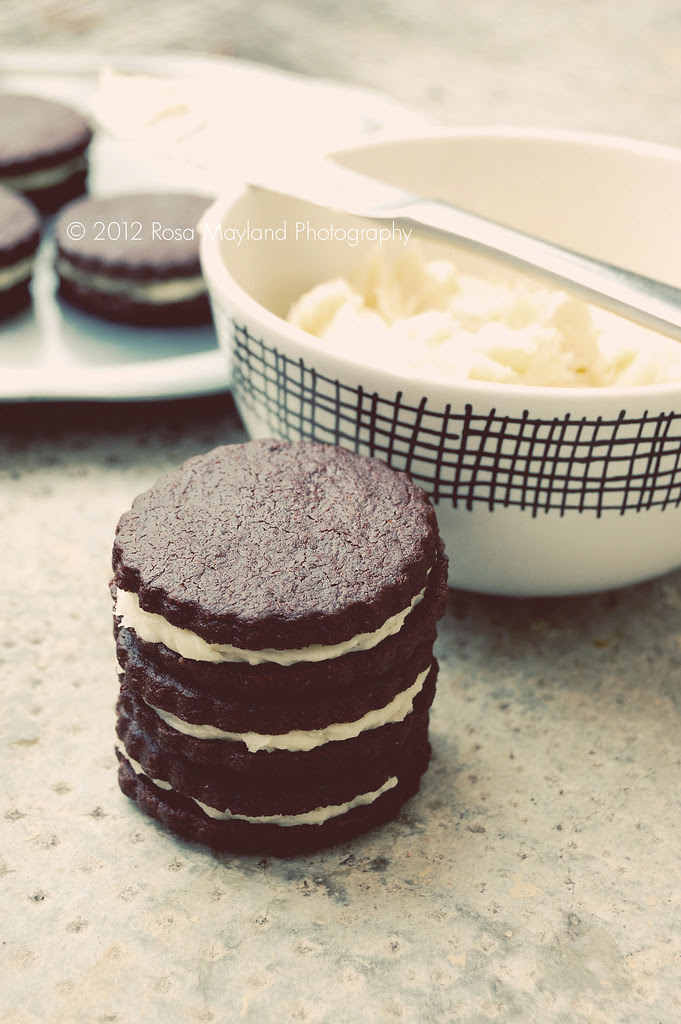 A fellow who does things that count, doesn't usually stop to count them.- Albert Einstein
A bit of fragrance always clings to the hand that gives roses.
- Chinese Proverb

The blogosphere is brimming with heartwarming suprises and extraordinary individuals. Since I have started Rosa's Yummy Yums in 2005 it has never ceased to amaze me and blow my mind. This ever-growing community of culinary geeks and fanatics who share the same passion for cooking and baking is like a second family to me.
Throughout the years, I have met a load of fascinating people and made some very good friends among my fellow bloggers, some of which I have been lucky enough to meet physically and others I still dream of having a cup of coffee with in the future.

Of course, I am not exactly so naive as to believe that everything is shiny, pink and perfect in this virtual world. As a matter of fact, it is without a doubt no different from reality. Concurrence is big there too, so you'll sometimes come across a lot of rip-offs as well as mean and jealous trolls with a complex of inferiority and be the favorite target of anonymous psychos who get thrills out of insulting and harassing you.

Nonetheless, even if there were days when I felt discouraged, disgusted and depressed because a sad and ugly mofo with a twisted mind decided to vent his/her spleen on me in order to relieve himself/herself of his/her frustration, anger, hate and low self-esteem by bringing me down and making me feel bad, I have not let this adversity destroy me. What kept me going was the awareness that there is also a lot of kindness and generosity out there to outbalance the negativity.


Too often we underestimate the power of a touch, a smile, a kind word, a listening ear, an honest compliment, or the smallest act of caring, all of which have the potential to turn a life around.
- Leo Buscaglia

One man practicing kindness in the wilderness is worth all the temples this world pulls.
- Jack Kerouac

For example, last week, when I was feeling rather low-spirited and wrote about my life story, I received many supportive and attentionate comments as well as personal messages which showed me that I was not alone, gave me hope, encouraged me to follow my path and brought back a smile on my face. This display of attention touched me deeply and I wish to thank my readers and colleague foodies for their sympathy, solicitude and friendship. You rule!

Lately, I have also been blessed to win a few giveaways and to be offered a bunch of wonderful cookbooks. Speaking of which, a few months ago Isabelle Lambert of the popular "Les gourmandises d'Isa" sent me an exemplary of her first publication. How nice and thoughtful of her. I was extremely thrilled that she had thought of me...

I have known this young woman for quite long now - we started blogging and joined The Daring Bakers practically at the same time - and have followed every step of her journey as a gourmande, so it is a enormous honor for me to present her work on my site. Isabelle was born in France and has been living in Québec (Canada) for about a decade. She hails from a family of professional bakers/pâtissiers, butchers/pork butchers and caterers, and grew up being surrounded by cuisine enthusiasts who produced their own fare, hence it is no wonder that she cultivates a strong interest for the arts of the table.

This bubbly and dynamic lady decided to start a blog to stock all her recipes and constantly have them to hand, but after a while, comments came in and she began to realize that what she created impacted on others. As a result, she began to take this activity more seriously and put together posts with more detailed explanations and better pictures. Over the years, she gained many followers and ranks among the most influential French-speaking bloggers on the internet. 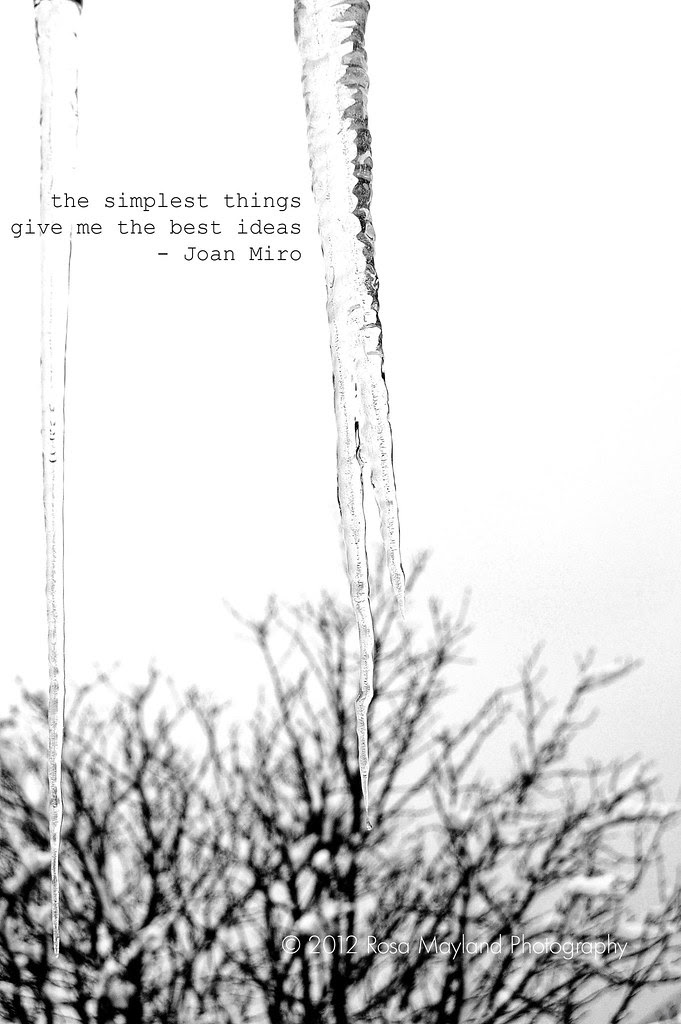 In her book, Isabelle shares 150 of her favorite recipes inspired by her love for Québecois and North American chefs. It is chock-a-block full a ideas for delectable savory dishes such as quiches, Flemish beef stew, caramel pork, rillettes de Mans, monkfish blanquette, chicken tajine with dried apricots, lobster rolls as well as  abunding with marvelous sweet treats (2/3 of the book is dedicated to desserts) such as piña colada muffins, maple syrup bars, creamy orange tart, bacon toffee, coffe éclairs, churros, salty caramel spread and many more.

Provided that you can read and understand the language of Molière (no translation exists), "Les Gourmandises d'Isa" is a lovely compendium of family-style, easy-to-achieve and tasty specialitise which will satisfy your appetite for fullfilling and comforting grub.

After a lot of hard-thinking and endless flipping through the pages of this softcover (taking decisions isn't my strong point), I finally decided that I was going to share with you Isabelle's own version of the famous Oreos.


I am still convinced that a good, simple, homemade cookie is preferable to all the store-bought cookies one can find.- James Beard


Noncooks think it's silly to invest two hours' work in two minutes' enjoyment; but if cooking is evanescent, so is the ballet.- Julia Child

I occasionally buy the original cookies when I come across a packet in my supermarket and moderatly appreciate that confection, yet I can't say that I entirely understand the fad about them nor that I can really say I find them as irresistible as everybody does. Originally, I was attracted to them because I have an open mind, thus I like trying new things and because they are a symbol of a country - USA- I dream of visiting and which's gastronomy I adore. However, I prefer not to consume junk on a regular basis (only rarely and there are still things I categorically refuse to touch) as I try to ban as much industrial "food" as possible from my diet. As a result, Oreos have only graced the shelves of my cupboard twice and I am seriously considering ending my relationship (if there was ever one, though) with them right now considering that they can easily be replicated at home.


We are living in a world today where lemonade is made from artificial flavors and furniture polish is made from real lemons.
- Alfred E. Newman

High-tech tomatoes. Mysterious milk. Supersquash. Are we supposed to eat this stuff? Or is it going to eat us?
- Annita Manning

Homemade Oreos are by far my drug of choice. Not only are they made with 100% natural ingredients, but they have a finer taste too. It is impossible to compare them with those produced by Nabisco, a division of Kraft Foods and another big corporation whose interest is not your health, but rather to create monopoly control over the food system.

Unlike the palm oil-loaded, additive-ladden, nutrient-poor and fashionable wafers, Isabelle's Oreos (which I have slighty altered - salt added to the filling and I substituted the margarine with butter) don't have a cardboardy/dusty flavor or fail to deliver oomph. Those "Artisanal Oreos" are not overly sweet and offer an intense aroma of cocoa, vanilla and butter. Once you've bitten into one, you'll get hooked and will forget your addiction for the manufactured stuff. It is definitely worthwhile investing efforts into the baking of those babies as store-bought biscuits cannot compare to these! 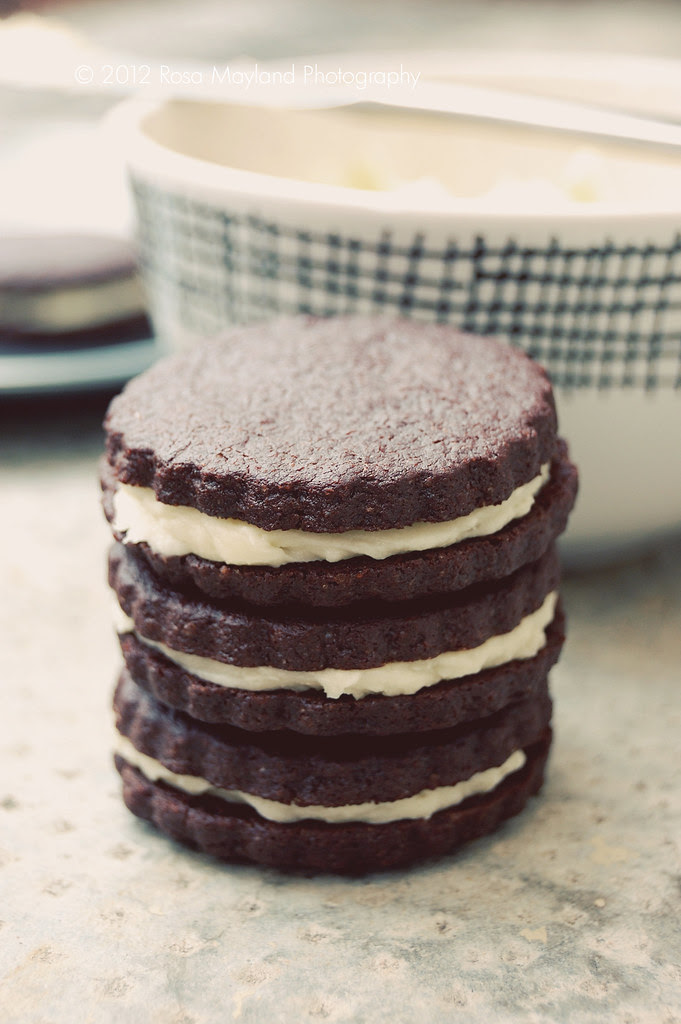 Method For The "Cookies":
1. Sift the flour, cocoa and salt together. Set aside.
2. Cream the butter and sugar together in order to obtain a pale, fluffy and creamy mixture.
3. Add the egg and vanilla. Mix well until fully incorporated.
4. Add the dry ingredients and using a spatula, mix well until just blended (don't knead).
5. Wrap the dough in clear plastic wrap and store in the fridge for 15 minutes.
6. Preheat the oven to 160° C (325° F).
7. Sprinkle your work surface with cocoa, then roll out the dough to a thickness of 5 mm.
8. Using a fluted round cookie cutter (4 cm/1.6 inch in diameter), cut the dough into about 40 rounds (you can re-roll the scraps). 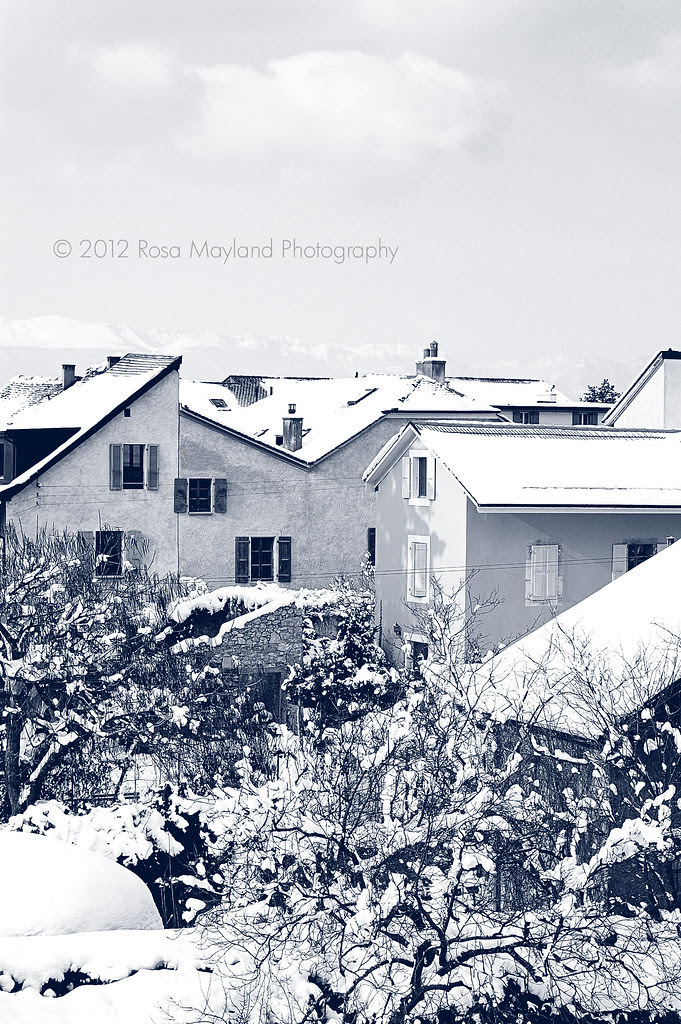 9. Place cookies on prepared baking sheets 2.5 cm apart.
10. Place the cookie sheets in the freezer for 15 minutes.
11. Bake the cookies in the middle of the oven for 15 minutes.
12. Remove them from the oven and let them cool on a wire rack.
Method For The "Filling":
13. Beat the butter, until light and creamy.
14. Add the powdered sugar, vanilla and salt, then beat well until smooth.
Method For "Assembling The Oreos"
15. After cookies have cooled, put 1 1/2 Tsp of the filling between two cookies, putting bottom sides together.

Comments:
It is very important to freeze the pastry rounds if you do not want the cookies to spread out while baking. 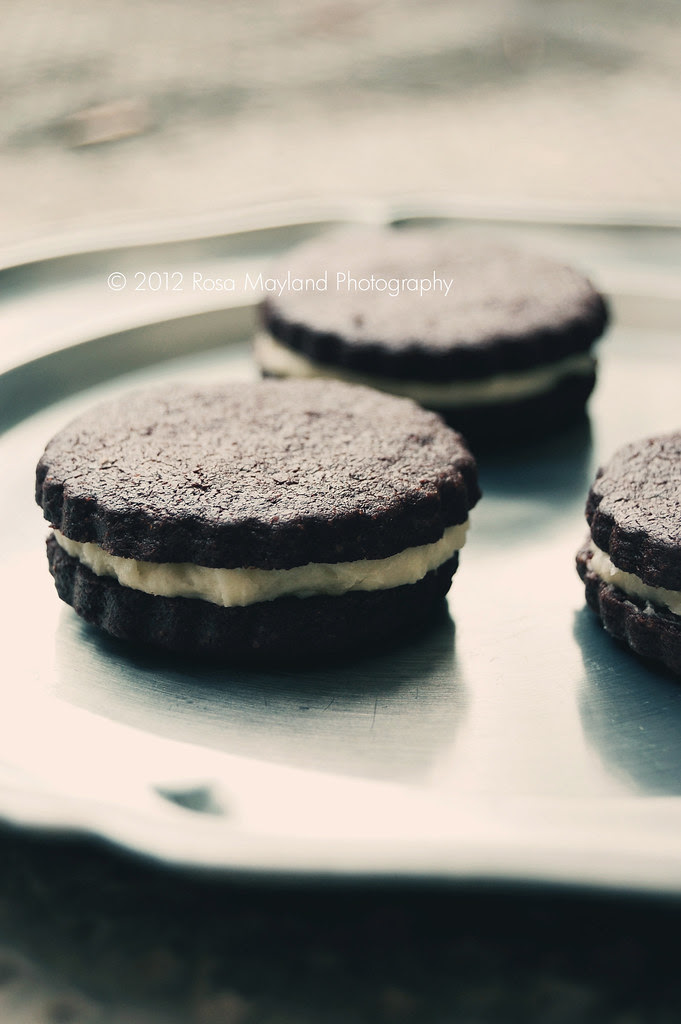 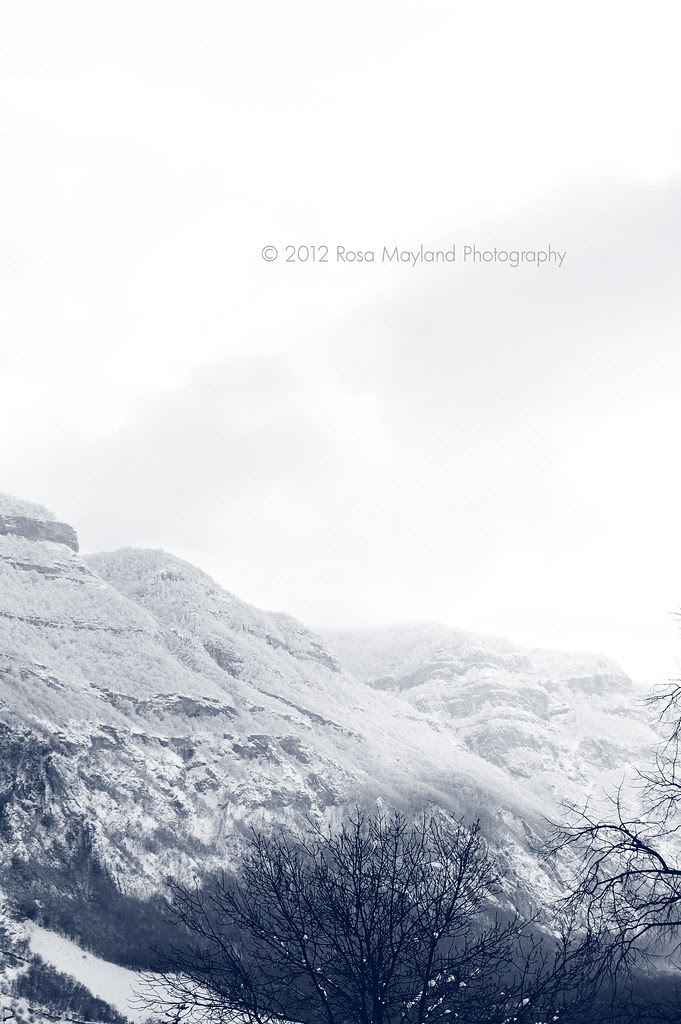 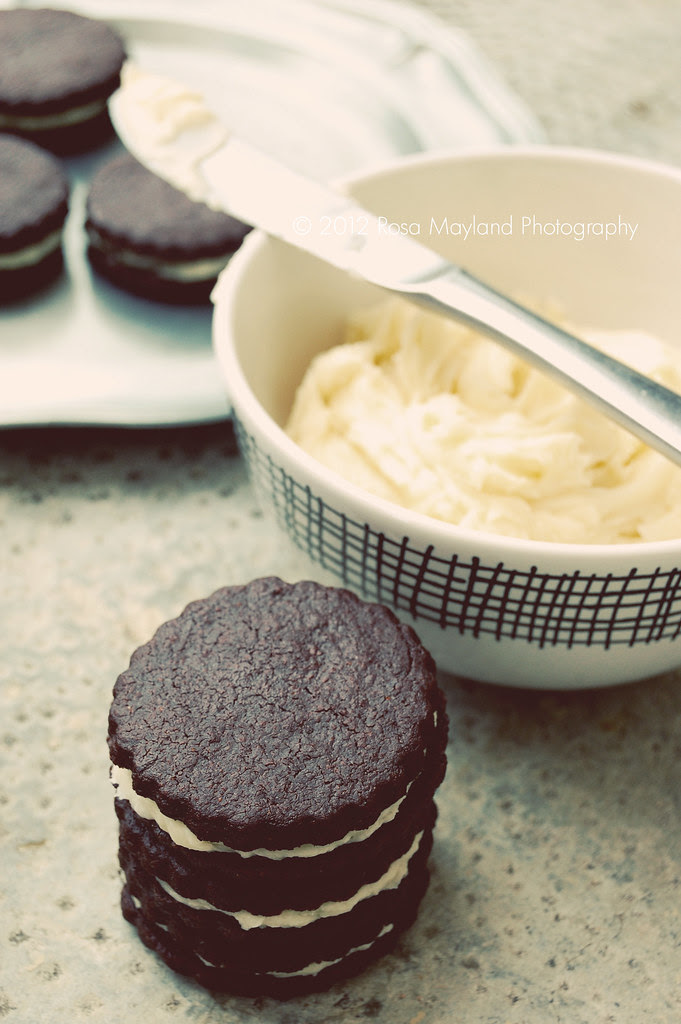